For the first time ever, it is possible to visualise the malware code through artistic visualisation and computational technology. 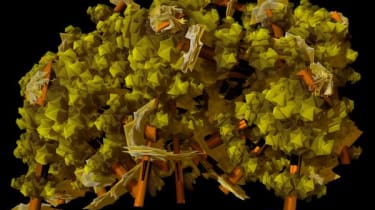 The worlds of IT security and art joined together as Message Labs exhibited a collection of cyber threats turned into graphical computer images.

The exhibition was opened in Covent Garden, London, and is the first time ever that images had been developed which visualized cyber threats using the actual computer code of the malware.

The process worked with Message Labs generating a machine code disassembly of the malware, which was then provided to computational artist Alex Dragulescu, who with the aid of his own computer program created the images.

Alex Shipp, senior anti-virus technologist and imagineer at Message Labs said: "It was a collaboration between Message Labs and the artist. We selected 16 different pieces of malware and fed it in to him. It was up to him to generate the features, such as the tentacles and tendrils."

Dragulescu was only artistically involved in associating code with each graphical feature, and choosing colours. The software was deterministic, so each individual malware feature was the same for all.

Adrian Chamberlain, CEO of Message Labs, said: "For our teams of researchers that obsessively track this evolution and stop these threats in their tracks, around the clock and around the world, being able to 'stare the enemy through the eye' through Alex's art is fascinating."

"No-one knew what threats look looked like - they represent the underworld of the internet that we try to stay one step ahead of each and every day."