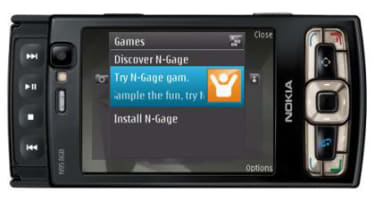 Last year, I had a brief relationship with the silver-fox that was the original Nokia N95. This made its debut in late 2007, but that quickly broke down when its bigger (capacity-wise), and better-looking brother appeared on the scene.

You may feel IT PRO somewhat slow of the mark for featuring a review of this product after so many months, but there is method in our madness. I wanted to live, breathe, work and play N95 8GB to ensure it has truly been road tested for corporate use; more of a meaningful, long-term relationship than a brief fling, if you will.

Size-wise, the N95 8GB is no super model, but nor is it, as Cartman in South Park would say 'big boned.' At 128g, 99mm long (and that's before you've even extended the number pad), 53mm wide and 21mm thick, it's bigger than I'd like but it does have a lot of features and functionality to pack in and smartphone fans have always accepted the need to compromise the svelte factor to cram in the goods.

The N95 8GB is no exception. Chunky is perhaps the wrong word, but it's certainly not discreet and will certainly put a budge in your trousers, so you might need to be careful where you put it, especially if you're male.

Perhaps the size of the device helps keep it safe from harm. I've dropped the phone quite a few times and it doesn't appear to have done it any harm - a plus for those working in the field or in less than ideal conditions.

The most obvious visual difference between the N95 8GB and its predecessor is the shell, a sophisticated black hue, which actually fools you into thinking it's a different model on first glance. There's also the screen size, with the 8GB version having a very slightly larger 2.8in screen, compared to the original's 2.6inches. Otherwise it offers the same respectable QVGA (240 x 320 pixels) TFT display, an ambient light detector and the ability to display up to 16 million colours.

The handset offers dual-slide opening options, (as in, the screen can slide both up and down), which is a pretty funky in my opinion.

Sliding the screen up provides easy access to the traditional numeric keypad below, while sliding it down reveals fast forward, play/pause, stop and rewind buttons. When you open this option, the screen automatically turns into landscape mode, to optimise your viewing pleasure.