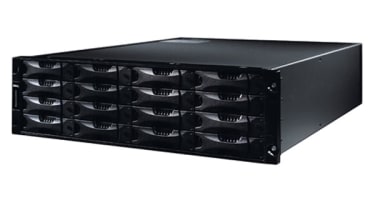 The appliance uses three watermarks where the minimum size is 10 per cent of the virtual volume. When the volume is 95 per cent full the system starts throttling back I/O performance to provide administrators enough time to increase the volume size. Once you reach the critical watermark the volume will be placed offline.

The management console is well designed, making key functions such as group, storage pool and volume creation that much easier. Usefully, you can view all groups from the same console and selecting a member appliance enables you to see details of its hardware components. As you add more members to your groups existing data will be automatically distributed across them all and removing one will cause resident data to be moved to remaining members before it is released. Access restrictions are also configured during volume creation, where you can limit iSCSI access by CHAP authentication, IP address or initiator name.

Dell's replication technology offers fault tolerance and disaster recovery as snapshots of selected volumes are stored in other groups called replication partners. During setup you can choose one-way replication to another group, bi-directional replication between groups or designate one group as a central location to which multiple groups can be replicated. If a volume gets lost or damaged you just clone a copy of the replicated volume and promote it as a new volume.

For testing we connected the test appliance to the lab's Gigabit network using all three ports on the primary controller and created a fourteen drive RAID-10 member array with two drives as hot-standbys. Within this we created three 50GB partitions and limited target access to our test servers by their IP addresses. All servers were running Windows Server 2003 R2 along with the latest version of Microsoft's freely available iSCSI initiator.

Starting with a Boston Supermicro dual 3GHz Xeon 5160 server we logged on to the first virtual volume and ran Iometer configured with four disk workers, 64KB sequential read transfer requests and 100 outstanding I/Os, where it reported a very impressive raw read throughput of 113MB/sec. With a second Boston dual 3GHz Xeon 5160 server logged onto the second volume we saw Iometer report a cumulative throughput of 225MB/sec.

Adding a third server logged in to another dedicated volume caused a minor amount of contention with each Iometer instance dropping to between 96MB/sec and 98MB/sec. Nevertheless, this panned out to a cumulative throughput of 292MB/sec - only a shade off Dell's claimed sustained maximum bandwidth of 300MB/sec.

The addition of the thin provisioning and replication features gives Dell's PS family of iSCSI appliances what it needs to make it a viable proposition in the enterprise. The PS5000XV clearly shows the potential of iSCSI at this level and its combination of a high storage capacity, quality fault tolerance, top performance and ease of expansion makes IP SANs much more appealing than costly and complex FC SANs.

Dell's newly acquired EqualLogic family of appliances offers a quality range of IP SAN features and the PS5000XV has expansion and high performance at the top of the agenda.