A superb choice for D2D data backup and recovery operations 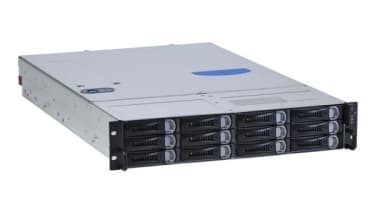 For testing we called up a pair of Boston Supermicro dual 3GHz Xeon 5160 servers running Windows Server 2003 R2 and equipped with Gigabit Ethernet adapters along with LSI dual-port 4Gbps FC HBAs. We found virtual device configuration simple enough where we created a range of iSCSI and FC disk targets and had no problems attaching the servers to them. Virtual tapes were also easy to create and manage and as soon as we logged Microsoft's iSCSI initiator software into the virtual tape target the client system immediately spotted an Ultrium LTO-2 tape drive and loaded the drivers.

On one server we also loaded Computer Associates ARCserve Backup r12 and presented a NEO 2000 VTL to it over iSCSI. ARCserve identified it correctly and from its Device menu we could see the LTO-2 drive along with thirty slots all loaded and ready to go.

General performance for virtual disks also sees some huge improvements over previous REO models, although it is still an area of concern. We created two virtual disks and assigned one to each of our test FC initiators.

Using the freely available Iometer utility configured with four workers, 10 outstanding I/Os, 64KB transfer requests and 100 per cent read operations we saw the servers return a cumulative throughput of 230MB/sec. Not bad but take a look at our exclusive review of IBM's System Storage DS3400 Express, where the same two test servers reported a cumulative transfer rate of 670MB/sec for this FC only array.

To test iSCSI performance we created two more volumes, assigned one to each server's initiator and dedicated a data port to each one. For this configuration Iometer returned 53MB/sec and 57MB/sec respectively.

This is a huge improvement over the REO 4000, which only mustered 24MB/sec on one iSCSI connection but check out our exclusive review of Dell's latest EqualLogic PS5000XV, where the same pair of test servers came back with a cumulative 225MB/sec over iSCSI.

For real world tests we also presented an iSCSI disk target to ARCserve and a backup of 16GB of data to it returned average speeds of 43MB/sec.

The REO 4500c delivers a superb combination of virtual devices and its support for both IP and FC SANs makes it extremely versatile. Along with a high capacity and top expansion potential it's a good value proposition as well but there is a price to pay with its below par performance.

The REO 4500c is a superb choice for D2D data backup and recovery operations. It's offered at a very competitive price and the data compression card increases capacity immensely, but Overland could do much better in the performance stakes.