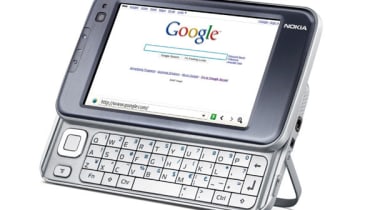 Nokia's N810 is the third in its line of Linux powered internet tablets, and the first that has an integrated Qwerty keyboard. Can it replace a bulky laptop in the mobile enterprise world? In its present iteration, it is doubtful.

The obvious comparison is with the iPod touch, Apple's personal media device with a number of internet additions to it (such as a web browser and the recently announced email application). But with Linux on the N810, a physical keyboard and an SD card slot for expansion, Nokia are pitching their device as a seriously well connected internet device.

Unfortunately, from an enterprise point of view, it rather frustratingly misses the target. The device hardware is slightly less than you would expect, and the software lets it down badly. Alongside Wi-Fi connectivity, it also has Bluetooth (something the iPod Touch lacks), which enables you to pair it to a mobile phone and use the phone for an internet connection. Why the cellular circuitry has been left out is one of the many questions that come to mind about the N810.

The built in GPS is of similar standard to that found in Nokia's high end smartphones - it's accurate but takes a long time (between one and three minutes) to get a fix on your position. And the navigation software is incomplete, costing you another $99 (49) for three years if you want the N810 to do any route planning for you.

In fact, Nokia has shipped the N810 with a massive hole in the built-in applications, lacking both a PIM or an office suite. A basic Notes application is present, and the address book captures info from email and IM contacts you add; but that's your lot. The contacts don't sync to Outlook, and there is no calendar application at all. The email client is clean and quick, but has a very small feature set and should not be something you rely on.

The lack of a standalone word processor, spreadsheet or presentation software pretty much destroys the N810 as a potential enterprise device. The recommended option seems to be to rely on 'online' software suites - and the prominence of shortcuts to the Google Apps (Docs, Calendar, Gmail, etc) bears this out. Unfortunately, a number of Ajax elements in the web pages of these application sites don't work with the Mozilla based browser. For example you can't select individual calendars to display in Google Calendar, which defeats the point of having shared calendars. So Nokia's suggested solution doesn't actually work 100 per cent.

I suspect that N810 users are expected to head out and download suitable applications -after all this is a Linux deice and there are a lot of Linux devices out there. Which is true to a certain extent, but the N810 runs a Linux interface (developed by Nokia) called Maemo, and the central Maemo site lists just over 100 software applications developed for the N810, none of which can be considered enterprise applications.