IT PRO spoke to AMD's chief technology officer, Phil Hester, about the company's plans to stay one step ahead of Santa Clara giant Intel. 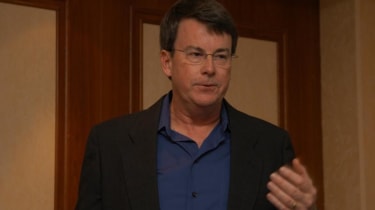 Microchip maker AMD might be a minnow compared to rival Intel. AMD is worth $4.32 billion against Intel's market capitalisation of just under $120 billion. But the smaller company believes that it is leaner, smarter and more flight of foot than its larger competitor.

AMD was first to market with X86 dual core chips and had low-power processors on the market before Intel. The company also bolstered its position in the market by buying graphics card maker ATI in 2006.

But the challenge for AMD, according to analysts, is to maintain a technical edge over Intel for long enough to recoup its investments, but be smart enough to move on before Intel's much greater firepower outguns it. The current focus is on building accelerated processing units, or APUs.

IT PRO spoke to AMD's chief technology officer, Phil Hester, about the company's plans to stay one step ahead of the Santa Clara giant.

You are redesigning how a PC is built. Why are you doing this?

First we don't believe traditional PC applications will go away, but they will be supplemented more and more by media rich environments and in order to deal with that the right approach is to combine a CPU with what are traditionally called GPUs to create an accelerated processor unit, or APU.

Does that mean you are going against the idea that adding processor cores improves performance? Why doesn't it?

The applications that you or I would use on our notebooks or desktop machines were never written for more than one or two cores to begin with and those applications are already fast enough: your spreadsheet opens fast enough your PowerPoint moves fast enough from page to page.

Trying to make something that is already a sub-human response time is not a good use of power, money or silicon. What is more and more useful is for the image you are looking at to be higher quality and more realistic and that is fundamentally a parallel processing problem.

ATI - which you now own - is well known for its graphics cards but the more innovative work appears to be around integrating that processing into smaller devices such as laptops or mobiles. What are you doing there?

If you look at computing power in the next generation of handsets they will be able to capture HD-quality images. But because they are handheld devices you need to deal with image stabilisation. That is, a digital signal processing or parallel processing problem.

A lot of the technology developed to improve the image in gaming or televisions also applies to handheld devices.

AMD is also working in the high-performance computing field, with companies such as HP and a number of specialist manufacturers. You've been using the graphics card for parallel processing. How does that work?

The GPU has been buried underneath the software layers that isolate the graphics processor from the traditional PC applications, but if you look at the compute capabilities of today's GPUs, they are true supercomputers. They are close to half a teraflop of processing each and are incredibly power efficient compared to traditional processors. So they allow people to scale their data centres more than they could in the past. They're being used by the national laboratories, financial institutions and even car makers to simulate a car crash.

How does the APU fit into all this and what should someone looking to buy a PC look for in terms of specification?

So we focus on that experience: How good is the image? What's the battery life? How well does the machine transition from running traditional applications to those new applications?

As technologists our job is to figure out how best to put the hardware and software together to deliver that. And you do have combine CPUs and graphics processors which is how we come to the APU: it deals well with both worlds.

We've talked about faster and slicker but not greener. That's another area you've been actively researching. How does that affect the mix of technologies we are buying today?

In the PC space one of the big complaints people have about their notebooks is battery life: either you have a very big heavy battery or you are limited to two to three hours of life. People would like a full business day of work on a standard battery.

The challenge here is that the requirements change from one generation to the next: you might make an application 30-40-50 per cent more efficient but typically a richer application comes in that people want to run, and people consume that additional capability.

We drive to make each generation of technology 30 per cent more efficient but how that is used depends on how the manufacturer of the device exploits that capability. In a lot of cases it's to enable new the applications that people are looking for.