We take a quick look at the latest budget laptop from Asus - the Eee PC 900. 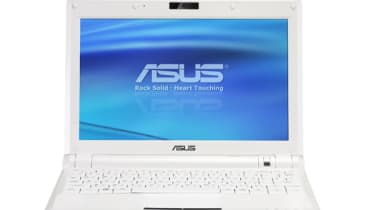 Click here for our Quick Take video on the Eee PC.

What it was released last year, the Asus Eee PC redefined what a laptop could be. With its less is more approach, in terms of both size and cost, it showed that a cool laptop is no longer defined just by how expensive it is but by what it can offer - low cost chic, if you will.

With the Eee PC shipping more than a million units so far, it's no surprise that competitors have been queuing up to get a piece of the budget laptop action. HP has announced its Mini-note effort, Elonex has made some 100 laptop noises, and earlier this month we even spotted prototype Atom based machines from MSI at IDF in Shanghai.

However, Asus is capitalising the momentum it has with the market it created by releasing a follow up to the first Eee PC. The Eee PC 900 addresses several of the shortcomings of the first one and based on what we've seen, if you've been holding out on getting these in for distribution to your work force, this is the model that may well see you dipping into your budget.

This isn't a full review, as we were only able to get to play with the 900 for a very brief time, but it was enough to gain some very strong impressions.

Firstly, let's make clear what the Eee PC 900 doesn't have. There have been rumours of a future revision offering integrated Wimax and an Atom processor and while this may happen later in the year this model is still powered by the same Intel Celeron-M ULV 353 CPU running at 630MHz and sat inside a G945 mobile chipset with Intel GMA 900 graphics.

The DDR2 memory complement has increased from 512MB to 1GB, which is very welcome, even with the Linux edition. The new model is available with Windows XP too, though the version we played with was Linux based.

The Eee PC 900 offers up exactly the same dimensions as the previous versions (8.9 x 6.5 x 0.9-1.4in), but the weight has increased slightly form 920g to 999g. The machine is encased in a sturdy pearl white plastic casing and Asus also supplies a protective pouch.

The display size has increased however, expanding to fill the lid as a conventional laptop would, which certainly improves on the first models rather odd look with the speakers running down the side of the screen. The speakers have instead been moved to the underside of the unit.

Asus has increased the resolution to 1,024 x 600, which is an important improvement. Many web sites are still optimised for 1,024 x 768, and so means that many web sites will fit the screen nicely, without the need for any horizontal scrolling.