Is everyone in the office squinting at their screens? A 22in widescreen monitor will help them see the bigger picture. 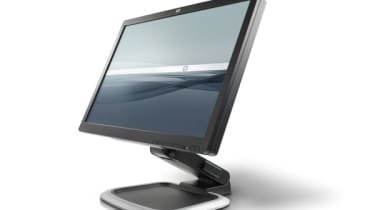 If you look around your company floor, the chances are that most employees will be sitting in front of conventional 17in or 19in square-shaped monitors.

While they are increasingly taking over in the consumer space, corporate customers have shied away from moving to widescreen displays. This is mainly because of three things. First, some corporate applications are either hard coded to specific resolutions or don't translate to well to widescreen. Second, some perceive higher costs, and third, simply due to fear of change.

However, there's no doubting that the widescreen aspect ratio is more natural format and is easier too look at - after all our vision is wider than it is tall and studies have shown that they pay dividends in terms of increased productivity, thanks to increased size and greater resolution.

For example, Outlook works very well in widescreen as you can see your emails a lot easier, and you can take in the From, Subject and Received tabs with the message to the right, instead of underneath. Also, utilities such as Google desktop and Windows Vista's side bar are really designed with widescreen displays in mind, sitting as they do at the edge of the screen.

Of the various sizes, the 22in display is becoming one of the more popular. It offers a native resolution of 1,680 x 1,050, giving a real boost over the 1,280 x 1,024 pixels of a standard 17in or 19in screen, and it's appreciably bigger than 20in widescreens offering the same resolution, so avoiding users having to strain in any way to view your data.

Admittedly, if you want your employees to be able to view two A4 documents side by side at 100 per cent zoom, then a 22incher won't do - you'll need to move up to 24in displays, which are larger and more expensive. However, if you think of the 22in format as a widescreen 19in monitor you'll be more than satisfied.

This brings us then to the 22in L2245w, the newest addition to HP's mid-range business focused Advantage display range. The display is encased is a smart-looking black bezel, which to my surprise was described as Carbonite in the specifications. Wasn't this what Han Solo was encased in for 'The Empire Strikes Back'? Is HP the evil empire?

Either way, the HP logo sits at the top, a TCO'03 sticker at the top right displaying its green credentials and one at the bottom left indicates its asset management capabilities, and indeed there's a security slot present - just add a cable.

There's also a handle at the top of the bezel, a small but thoughtful touch that makes it easier to move around. Not only that, but there's an area at the bottom where workers can keep their pens and other clutter - another small but practical touch.

In the box you'll find a VGA cable, but not DVI, so if you want to ensure the sharpest picture quality, you'll have to source your digital cables elsewhere.

The stand comes pre-attached but needs to be stood up correctly with a firm hand and initially I was concerned I might break it in the process. Once done though, you'll find that this is a well-designed affair and brings a full range of movement to the screen. You get height adjustment as the screen can be easily lifted up and down with one hand, thanks to the solid hinge. It also rotates from side to side, so you can easily show co-workers what's on your screen and you can tilt the screen back, though not forward to any large degree.