Linux and Formula One

Formula One motor racing is using Linux to help shave another fraction of a second off a lap time. 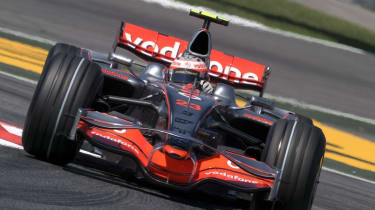 As a technical sport motor racing demands of its participants a close understanding of the technologies that can help them. F1 motor racing is probably second only to the aerospace industry in the application of aerodynamic simulation and wind tunnel technology. It is a testament to the rapid advance of Linux in high performance computing that most teams in Formula 1 have been using Linux systems in their aerodynamic and engine workshops for a number of years.

"Formula One is a product excellence business that's all about innovation and technology," says Jonathan Neale, the managing director of McLaren Racing. "We're competing for first place in an environment where the difference between first and tenth is about 0.6 seconds, so we're constantly seeking fractions of a second in performance improvement. On average we'll make a change to the car every 20 minutes during the course of a season, and to do that, simulation is vital in making efficient changes to the car." Back in the factory, McLaren uses computational fluid dynamics (CFD) analysis running on Linux on SGI Altix high performance computers to simulate and predict the car's behaviour.

Motor racing wasn't always like this. Once upon a time those daring young men diced with death and each other in their flying machines, with little more than grease blown overalls, a loose flying-helmet, oil-splattered goggles and a V8 engine between them and the oncoming road. The skill of the driver was everything.

Times have changed. Modern motor racing in the 21st century is a team sport, and the difference in performance between the front of the grid and the also rans is measured in hundredths of a second. Every year the cars get faster, the lap records come down, and the drivers and cars reach new limits of endurance and performance, despite a regular tightening of the rules for the sake of safety and increased competitiveness. Every new rule that is imposed to slow the cars down or level the playing field becomes a challenge for the designers, to readjust the vital balance of weight, material, power, downforce, grip, and traction.

A race is won in the factoryA driver still needs courage, a sure eye, a streak of irrationality and split-second timing. But when it comes to finding those extra few fractions of a second, design is everything. Good drivers are valued not just for their speed and courage, but for their sensitivity to the nuances of the car's performance, which helps the mechanics and engineers to adjust a millimetre here or a centimetre there, which can be the difference between success and failure in this most unforgiving of sports. The technology and science applied to the development of race cars is more akin to the development of jet fighters than the application of science to any other sport, and Linux, running on a variety of high performance configurations, is a key part of the equation for all the leading teams.

The Renault racing team, for instance, first began experimenting with Linux clusters as far back as 1998, and has used IBM Linux systems to run critical database and telemetry applications since 2001. Telemetry systems transmit data from the car to the technicians on the pit wall during the race. "When the car is running it transmits a huge amount of real-time data on the critical parameters of the engine or chassis to the ground staff - this system is run on Linux," said Christophe Verdier, Renault's F1 Team IT director, back in 2005.

Verdier noted at the time that the use of Linux for engine and chassis computational analysis had slashed Renault's analysis time by 90 per cent, and in doing so, had ultimately reduced development costs. "A simulation operation which did take three weeks is now completed in 18 hours," he asserted. "The performance of this system has enabled Renault F1 to fully optimise its V10 engine capability. This has given the team a considerable advantage, since a race is as much won in the factory as it is on the track." There really isn't a proprietary alternative that can provide these kind of performance advantages at a comparable cost.

A gallery of windDuring the 2007 season, the McLaren drivers, the reigning world champion Fernando Alonso and the upstart new boy Lewis Hamilton, ran neck and neck for the leadership of the championship, in close competition, on and off the track, with each other, Kimi Raikkonen and Ferrari. Against all the odds, Raikkonen's Ferrari pipped the McLarens in the final race of the season, among a flurry of appeals. Ferrari is another team that has spoken about its use of Linux for the analysis of engine and aerodynamic data at Maranello and the famous "Galleria del Vento", or Wind Tunnel, designed by Renzo Piano. Off the track the sensation of the 2007 season was the cold war-like spying scandal which beset McLaren and Ferrari, and resulted in the withdrawal of all points awarded to McLaren in the 2007 Constructors' Championship and a record fine of $100 million.

Simulation is a vital technique for predicting the behaviour of the cars in all weather conditions, on the wide variety of tracks and surfaces used by Formula One. Adjustment of the aerodynamics of cars are affected not just by speed on the straights, but by the cornering characteristics of the cars on every corner of every race track on the calendar.

The McLaren race car "is fully designed using Linux and SGI kit", says Keith Vickers, Northern Europe presales manager for SGI. McLaren uses computational fluid dynamics (CFD) software provided by SGI to simulate airflows over the car using SGI Altix supercomputers. The hardware and software is identical to that used by several production car manufacturers, although for obvious reasons, a race car designer has different imperatives to the production car designer, who is primarily focused on the twin goals of economy and safety.

According to Dr Mark Taylor, Head of CFD, McLaren Racing. "The beauty of CFD is that it allows us to model scenarios that enable us to get the performance we need in a range of circumstances. The car has to be quick in fast, medium and slow corners, and in a range of track conditions, and we use CFD to model these and analyse the effects of differing ride height, steer angle etc. Without CFD we'd have to do this in our wind tunnel, but as this is a finite resource, time we spend fine-tuning the car means we have less time to investigate other ways of making it go faster."

Analysis is also performed on the telemetry data that is collected during a race. A team may monitor the parameters of the car while it is running to identify problems or make small set-up changes during the course of the race, or collect the data for analysis back in the factory, to predict and modify the car's performance in future races. Every piece of data about the engine and the car is stored for future reference. Every alteration is recorded and may be retrieved for retrospective analysis of how the car's behaviour has changed over time. The vision for the future is that the telemetry data can be fed back for CFD analysis and the parameters of the racing car can be readjusted in real time while the car is on the track... pushing the driver even further back in the equation.

According to Vickers SGI provides Linux systems not just to McLaren but to a variety of F1 Teams, "some of which we can talk about, some we can't". They all need these kinds of systems, and Linux clustering technologies provide so many price/performance advantages that the only question is the choice of company to provide the requisite hardware and support.

The choice of Linux is driven by "the graduate engineers who come out of university, and are used to working with open source." A lot of post-graduate research is "done in HPC and they carry that mentality over to their working lives", says Vickers. Linux is the dominant operating system in the field of high performance computing, and "is far easier to move around, compile the source code, tweak the code and recompile. This is what attracts people in these kind of arenas," says Vickers. "There is far more scalability and flexibility." The same system that can run on 2000 core processors with terrabytes of memory can be tweaked and tested on the engineer's laptop. In a world where a fraction of a second makes all the difference the ability to tweak the parameters, adjust the algorithms, and push the equations to their limits, can be the difference between winning and losing. As in all high performance industries the motor racing teams have found a distinct advantage in working with open source, for the most practical of reasons, performance, cost and flexibility.

The gee-whizz companyOnce known as the "gee-whizz company" for its pioneering work in high-end graphics systems, SGI has been the purveyor of fridge-sized machines that were "never knowingly biege" for HPC and advanced visualisation since the mid '80s. Then famous for its role in providing compositing, animation and rendition tools for the special effects houses, SGI merged with Cray Research in 1996, and now specialises in areas where there is a demand for high performance computing, storage, visualisation and the manipulation of of vast banks of technical data. It's a specialised market in which SGI has very little competition. The applications have moved on and the demands of the market have become more sophisticated. And so have the machines. Typically high-end SGI Altix machines are located in the R&D departments of manufacturing and research institutes, where high-performance computing and data-intensive processing and simulation is a necessity. All SGI systems are powered by Linux. They are a good fit for the high tech world of the Formula One racing car.

"What we do in high performance computing with Linux breaks some boundaries", says Vickers. "What you're able to do with the open source community is far more flexible and allows you far more freedom of choice or inspiration, so that people can create and be creative, and leverage the creativity of a very considerable community worldwide. The engineers, depending in the different teams, have different views of how to use CFD. Some use clusters, and some use large shared memory systems. Linux is flexible enough to deliver similar results." What makes the difference is the particular input and vision of the individual engineers.

Linux is widely used in Formula One. AMD work with Ferrari, the Sauber team and others. BMW/Williams employ a Linux solution provided by HP. Linux is also used by the Ducati motor cycle racing team. Linux is chosen for the usual reasons - reliability, cost and price/performance. Cost is a secondary consideration to performance. More important is the versatility of Linux, and its proven record on high-density clustering solutions and large shared memory systems, which at some of the racing teams, such as Ferrari, entails more than 500 nodes to a cluster. Linux allows the teams to build scalable solutions for a fast moving industry that demands a quick and versatile response to rapidly changing parameters.