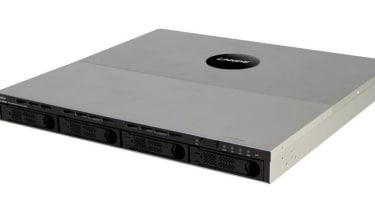 Two USB ports are provided at the rear but these have specific functions as one is used purely to back up the appliance's configuration to a USB flash disk, whilst the other handles monitoring of an optional APC Smart UPS. There are more power fault tolerance options on the table as the appliance also has a separate connector for a Linksys redundant power supply. The NSS6100 isn't a power hog either as our in-line power meter registered a 65W power draw in idle and 71W under load.

Alas, performance is a big disappoint as copying a selection of large files to and from the appliance over Gigabit Ethernet returned read and write rates for CIFS of 13MB/sec and 8.4MB/sec. FTP wasn't a lot better with the FileZilla client reporting average read and write speeds of 23.8MB/sec and 5.6MB/sec when copying a 690MB video clip.

The appliance also supports FTP over SSL but if you opt for this then watch performance take a huge nose-dive. With this activated we watched FTP read and write speeds for our test copies drop to only 4MB/sec and 0.5MB/sec respectively. The biggest problem here is the overheads inherent in FTP over SSL as we've seen other NAS appliances also delivering similar speeds for this.

So far nothing special but what really piqued our curiosity are the built-in hard disk encryption and the virtualisation features. When you create a volume you can opt to have the appliance encrypt it using 256-bit AES. You provide a password and when, for example, you're moving the appliance or just want the data secured, you select the lock option which unmounts the volume and makes its inaccessible. If power is cycled or the appliance rebooted it automatically locks encrypted volumes and won't allow access until the password is entered.

Encryption is hardware accelerated so performance overheads are minimized. However, we did find when rerunning our performance tests on an encrypted volume that CIFS read and write speeds dropped noticeably to 8MB/sec and 5MB/sec, whilst FTP operations slowed to 8.5MB/sec and 4.2MB/sec

Virtualisation works when you have multiple appliances acting as master and slaves. Essentially, you create JBODs on a slave and import them into the master which then looks after them as its own. Another useful feature is the ability to expand existing volumes into unused space.

As a basic rack mount NAS appliance the NSS6100 has a lot of competition although the virtualisation and encryption features do make it more appealing to small businesses. However, considering the appliance costs as much as twice that of many other vendors products Linksys is asking a lot and the pedestrian performance doesn't help its argument either.

Linksys delivers a well built 1U NAS appliance with a number of unusual features. The encryption and virtualisation capabilities increase its appeal to business users but we found performance to be comparatively poor and it's difficult to see how the high price tag can be justified.