Intel has shown off its latest developments in robotics - millions in research, but they still drop mugs. 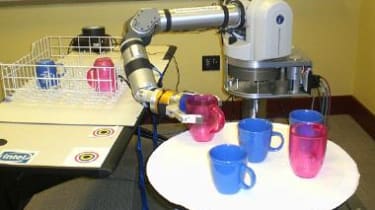 Robo-butlers are just a decade away, according to Intel researchers - but they've got to work out a bit of mug-dropping clumsiness first.

Earlier this week, Intel showcased a set of innovations in its robotics research from its labs in Seattle and Pittsburgh, showing the current limitations as well as the potential of such technology.

Josh Smith in Seattle showed off two new innovations. The first is a method of tracking objects as they move; the second is a mechanical hand which can trace objects without even touching them, "pre-shaping" the object in 3D.

In Pittsburgh, researchers Dave Ferguson and Siddhartha Srinivasa demonstrated a robotic arm attached to the base of a Segway scooter. Its laser-guided hand featured multiple cameras, letting it see and identify objects. This particular arm was trained to pick up mugs from a table and transfer them to a dishwasher rack - which it did successfully most of the time, but the odd mug was sent crashing to the ground.

It is currently powered by two standard PCs, which are mounted to the machine. The eventual goal is to have the robot run from a standard home PC using a wireless connection.

Ferguson explained that the mobile robot will eventually be able to move around a house, picking up and retrieving objects such as keys or fetching a glass of wine - because, as Srinivasa noted: "everyone needs a robotic barkeep."

The goal is that the robot will be able to function at human speed, seeing and understanding objects as quickly as we do. It's also designed to be stopped with very little human interaction, so it can be used by elderly or ill people without safety fears. "It will break before it breaks anything," Srinivasa said, admitting that the multi-jointed arm was rather scary looking.

Currently, the robot must be shown objects to know what they are, but the researchers hope to be able to simply let it loose in an environment to take pictures for the first few days to learn.

The researchers said that robotics are still in an early stage - a point proven by the mugs on the ground - but that they have the potential to become as ubiquitous as computers are now. Indeed, they predicted robo-butlers could be cleaning up our homes or helping with medical applications in ten years.

They compared the current revenue of the more successful robotics firms with that of Apple's $100 million turnover in the early 1980s, suggesting the robot market will follow a similar growth. They also cited statistics from the Japan Robotics Association, which said the market will be worth $60 billion by 2025.

It's not just about technology, but whether people would want such devices in their homes. Srinivasa said he would be happy taking the robot home already, but admitted he's a bit biased: "I'm a robotocist."

"There's a lot of human interaction issues that need to be sorted out," he said, before robots will be serving us dinner and doing the dishes afterwards. But doing the dishes - without dumping mugs - will certainly help win over a few fans.

For another video from Intel of the robot picking out a Rubik's cube from several objects, click here.