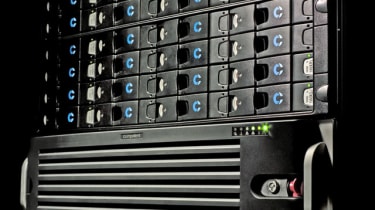 Compellent's Storage Center aims to take the strain out of ILM (information lifecycle management) by delivering a storage solution that automates data classification. One of the biggest problems with an ILM policy is managing the migration of data throughout an organisation and creating an automation phase to determine where it should physically reside and when it should be archived.

Up to three storage tiers are employed, with support for both FC and IP SANs and it offers an excellent range of virtualisation features. The really smart bit about the data progression is that not only does it work at the block level and not the file level, but it's a two-way process so older data that is suddenly called up for active duty will be promoted up through the tiers.

On review we have Compellent's ILM bundle, which comprises a controller and two sixteen bay disk arrays. The new Series 30 controller is based on a Supermicro 3U rack chassis equipped with dual port and quad port 4Gbps QLogic FC cards, which provide connectivity to the disk arrays and host systems. The disk array providing the higher tier storage came with eight 10K FC drives, whilst the other was kitted out with eight SATA drives. For IP SAN testing the review system also came with an optional dual-port QLogic iSCSI HBA.

Installation is straightforward and we found the redesigned web interface a big improvement over its predecessor. It's much easier to use thanks to a new quick start wizard to get you up and running.

Compellent's DBA (dynamic block architecture) technology is a key feature, which uses metadata to track all data blocks. It comes into play during this phase as you need to create Disk Folders, which can use all available drives or selected drives and you can mix FC and SATA as well. Each Disk Folder contains virtual volumes, which you then assign to your FC or IP SANs.

Each Disk Folder has up to three storage tiers, which Compellent's data progression feature uses to migrate data from FC to SATA storage as it becomes less active. The first tier contains 15K FC drives, the second has 10K FC drives, whilst the third contains all the SATA drives and the system automatically places disks in specific tiers based on their spindle speed and interface.

We created a single Disk Folder with two active tiers and within this we set up two volumes for our iSCSI hosts and another for our FC test host. Usefully, only two settings are used to determine data migration as you set the number of days a block must be unused for before it is moved to a lower tier and a ratio that decides how quickly data is moved up and down the tiers.