Forget the MacBook Air. Is this the ultimate executive ultra-portable laptop? 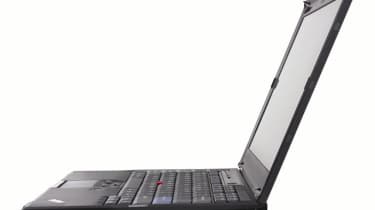 Not only that but on the right hand side you'll find a DVD burner, waiting right there for you. We can personally attest to having been stuck on a press trip and wanting to read the contents of a DVD, only to realise my laptop didn't have one.

In terms of fixed storage, Lenovo has fitted a 64GB solid state hard disk, a choice which sacrifices the capacity of conventional storage media for the benefits of the faster response time of flash media. Another down side of the SSD is that it pushes the cost of the notebook way up, but Lenovo has promised versions with conventional hard disks, though these haven't appeared as yet.

For the market that the X300 is aimed at this is certainly the right choice. Most professionals who would be using this would not require a huge amount of space - it's not aimed say at those who want to do video work.

Lenovo's choice of processor, the only option available, again reflects this - the Core2Duo L7100, is a low voltage Core2 that runs at a rather weedy 1.2GHz. While the Core2Duo architecture is very efficient in use one can't help feel that the laptop could use a little more raw grunt, though one could easily lay the blame at the foot on Windows Vista, which compared to XP is just slower. The benchmark score of 0.68 (compared to 1.0 from our reference dual core Pentium D desktop machine) is not bad however.

The choice of an SSD and 2GB or RAM as standard, helps to reduce the impact that Vista has, and certainly the 37 seconds it takes to resume from Hibernate is good news, and it's even quicker to come back from Sleep mode - though admittedly still not as quick as a Mac.

It also helps it terms of battery life. As standard the X300 ships with a 3-cell lithium polymer battery which in our tests gave us just shy of four hours use. However, depending on your use you may well see less than that, which is why we'd consider the optional 6-cell battery an essential for on the road use.

This should take your battery life up to around seven hours and what's more you can remove the DVD burner and replace it another battery, taking you up to around 10-11 hours. Of course this brings the weight up, but even so this still keeps the X300 in ultra portable territory, which is an impressive amount of time to go without having to plug in.

There are some areas where the X300 could improve. The graphics output at the rear is D-Sub only - DVI seems to be shunned for size and cost reasons and it looks as though we'll have to wait until DisplayPort become standard to see digital outputs as standard on notebooks.

The notebook also crashed, in public, with it crashing when asked to output to a presentation screen, but I would put this down to a Vista issue. And as I mentioned earlier more grunt, but without sacrificing any battery life would be welcome too.

It's also worth noting that unusually for Lenovo there's no docking station -just a port replicator. Then again this shouldn't be considered as a main machine - it simply doesn't have enough grunt for that.

However, for those looking for the ultimate serious ultra portable business tool, it's the new reference standard - it certainly shows the MacBook Air the door.

After a couple of weeks use with the X300 though I could only be impressed. It's not necessarily going to be everyone's ideal solution, and possibly something like the Asus EeePC 900 will deliver what most people need in a smaller and far cheaper package. However, if you want to maximise mobile productivity, while minimising support costs, features such as the SSD and the fingerprint reader could well bring their own cost savings over time. And even if viewed as an executive luxury, this is still going to be an investment that won't disappoint.

It's not flawless, but when it comes to no compromise ultra-portable business notebooks the Lenovo X300 is the new reference standard.