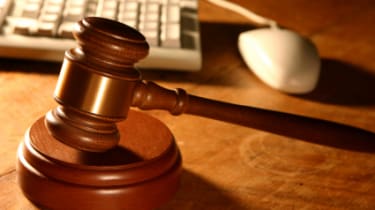 The casual observer could be excused for believing that litigation and teams of lawyers were the largest part of technical innovation in the computing industries, such has been the part played by ltigation and threats of litigation around patents, copyrights and trademarks during recent years.

Unfortunately, litigation has become a highly profitable way of doing business. Big money can be made for a relatively small outlay and litigation predicated around the "ownership" of ideas, patents and copyrights requires minimal investment in staff, research, manufacture or the trading of hard goods.

In fact all these activities have become superfluous in some areas of industry where possession of "Intellectual Property" has become the primary objective of trading.

"Intellectual Property", as Richard Stallman, the founder of the free software movement, puts it, "is at best a catch-all to lump together disparate laws."

According to Stallman, the term "suggests thinking about copyright, patents and trademarks by analogy with property rights for physical objects", which is "at odds with the legal philosophies of copyright law, of patent law, and of trademark law... These laws are in fact not much like physical property law, but use of this term (Intellectual Property) leads legislators to change them to be more so."

Very loosely, copyright protects an original work and is infringed by direct copying of that work. Patents cover methods and concepts and can be infringed unknowingly by anybody who has independently discovered a similar concept. Copyright can apply automatically to any original work.

Patents require approval by a governing body as they confer a monopoly on the successful applicant, thus inhibiting competition. In both cases, the intention of the original laws was to protect the rights of the creator.

In theory, patents are granted only after strenuous tests of originality and appropriateness have been met - and should only be conferred on inventions that are entirely original, are not obvious, and have the potential to radically transform the way things are done.

In practice, according to Mark Webbink, formerly legal counsel for Red Hat, "there has been a proliferation of trivial and contestable patents triggered by a relaxation of the rules by the United States Patent and Trademark Office (USPTO), which has progressively lowered the bar for patent claims."

Every independent survey undertaken into the usefulness or applicability of software patents has reached the same conclusion: that software should be protected by copyright, and that software and business method patents are not only inappropriate, but inhibit innovation and the spread of ideas.

Software deals in linguistic and mathematical expression, and software patents are akin to raising barriers on our ability to express ourselves.

Inadvertently, the clearest explanation of the effect of software patents was made by Bill Gates in a leaked internal memo back in 1991: "If people had understood how patents would be granted when most of today's ideas were invented and had taken out patents, the industry would be at a complete stand-still today."

Part of the problem is that the ownership of both copyrights and patents has been conferred not on individuals, creators or inventors, but on the corporations that employ them, and can be traded between corporations.

Many of the more high profile cases in recent years have concerned patents and copyrights that have been traded between companies as if they were independent properties. As a consequence, companies have come into existence that have no purpose other than to claim new patents, or to purchase moribund patents and chase them through the courts for their own profit.

Such companies have nothing to lose and everything to gain. In many cases, the cost of contesting a patent, searching for prior art and the recruitment of lawyers, is prohibitive and a distraction, so a settlement is made without recourse to the law and the validity of the patent is never constested.

Typically most patents are now owned by large enterprises, not for direct exploitation, but for protection against litigation by other patent holders.

So, for instance, Robert Barr, the patent counsel for Cisco Systems, told the hearings of the US Federal Trade Commission on "Competition and Intellectual Property Law and Policy in the Knowledge Based Economy" in 2002 that: "It makes more business sense to assume that, despite the fact that we do not copy other company's products, and despite the fact that we do not derive solutions to problems from the patent literature, we will be accused of patent infringement. The only practical response to this problem of unintentional and sometimes unavoidable patent infringement is to file hundreds of patents each year ourselves, so that we can have something to bring to the table in cross-licensing negotiations. In other words, the only rational response to the large number of patents in our field is to contribute to it."