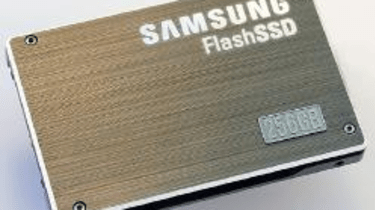 The days of small capacity, high-cost solid state drives could be drawing to a close with the announcement from Samsung of a 256GB SSD that it says is cheaper to manufacture.

The drive is four times the capacity of the solid state discs present in current laptops such as the Lenovo X300 and MacBook Air . This would remove capacity as a barrier to moving to SSD for many markets.

"With the development of the 256GB SSD, the notebook PC is on the brink of a second stage of evolution. This change is comparable to the evolution from the Sony Walkman to NAND memory-based MP3 players, representing an initial step in the shift to thinner, smaller SSD-based notebooks with significantly improved performance and more than ample storage," said Jim Elliott, vice president, memory marketing, Samsung.

Both 2.5in and 1.8in form factors have been announced, the latter the size that is used by the 64GB unit in the MacBook Air, prompting speculation that it could make its way into the next revision of the notebook. Samsung says that the 2.5in version will appear in September, with mass production occurring at the end of the year. The 1.8in version is scheduled for Q4 2008.

Rene Millman, Senior Research Analyst at Gartner UK, tempered Samsung's enthusiasm, saying that he was sceptical about the speed figures. "Frankly, I'm dubious about the performance claims so naturally I'd like to see real world testing results. However, if the claims prove to be true we should see a widespread move towards SSD in the laptop and the desktop sectors."

Intel has also said that it has some ground breaking SSD drives in the pipeline, which it announced at the Intel Developer Forum last April.