NEC tries to muscle in on the ultra-portable space with the dainty-looking but tough Versa S9100. 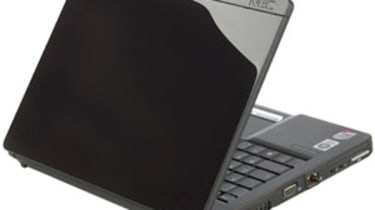 There's little reason to spend over a grand on a laptop these days. With the likes of Dell's Inspiron 1525 providing an impressive package for less than 500, laptop manufacturers are having to try harder and harder to justify breaking the 1,000 barrier.

The recent trend of thin, light, sexy ultraportables seems to be all the justification most manufacturers need, and although the sector is already crowded with impressive products such as the MacBook Air, Sony's VGN-TZ31MN and Lenovo's ThinkPad X300, NEC has now decided to join the premium featherweight fray.

The NEC Versa S9100 certainly has the figure for it: its dimensions are compact, if not as impressively svelte as Sony's VGN-TZ31MN, but it tips the scales at 1.26kg compared with the Sony's porkier 1.48kg. Only Toshiba's waif-like Portge R500 manages to sneak closer to the 1kg mark than this.

The figures don't quite tell the whole story however. We first encountered the S9100 in a meeting in a local Starbucks, and just picking it up was almost enough to make us choke on our frapp. Like Lenovo's Thinkpad X300, the Versa S9100 is a little more sensibly sized than many ultraportables, but its 1.26kg weight feels impossibly light. It wasn't until we pressed the On button and Vista Business fired into life that we believed its chassis actually concealed the working innards of a laptop.

That chassis isn't anywhere near as striking as some of its rivals, though. Finished in black from top to toe, it certainly doesn't draw attention to itself like the striking white Sony VGN-TZ31MN. There's also little getting away from the fact that it's easier to equate a solid, weighty object with quality, and the NEC's light weight means that, initially at least, it does feel a touch cheap. Other ultraportables such as Toshiba's Portege R500 or Sony's VGN-TZ31MN also suffer from plasticky build quality, but both of those make up for any physical defects by virtue of attractive design.

What the NEC lacks in looks, however, it makes up for with surprising sturdiness. Curiously, the UK press release makes no mention of the Versa S9100's Toughbook-rivalling aspirations, but a quick Google hunt reveals quite a few websites and blogs touting the S9100's crush resistance. While the lid of your average Panasonic Toughbook can, it is claimed, withstand 100kgs per square foot, NEC's barely-there laptop can take 300kg. As the only one in the country though, we weren't too confident about hopping aboard with our Size 14 shoes and, more crucially, our 16-and-a-half-stone 'physique'.

It's not too difficult to believe, however. Grab the S9100's lid between two hands and though it exhibits a fair amount of flex, apart from a very slight rippling on the display, it remained relatively unperturbed by the abuse. And no matter how hard we prodded the display's glossy rear, there was no sign of show-through on the display at all. Apart from a little give in the lid's centre, it certainly seems to offer impressive levels of protection.