The seventh annual OLAP survey has found those vendors that dominate the market, like SAP, don't necessarily deliver the value they promise. 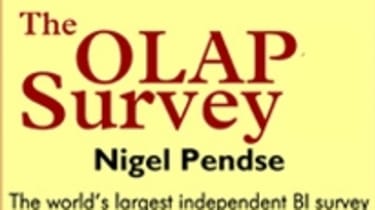 The world's most comprehensive business intelligence (BI) user survey has revealed that some larger vendors are increasingly failing to deliver successful and beneficial software deployments.

The BI Survey 7 follows on from six successful editions of the online analytical processing (OLAP) Survey. As the first BI survey, its author Nigel Pendse said the distinction between pure OLAP and other types of business intelligence products had blurred and the time had come to widen the survey scope to include other products that would not normally be regarded as falling into the OLAP product category.

Some 16 products or groups of products were used enough to be analysed individually. Out of these, SAP was the subject of the most negative findings, owning both its own business warehouse (BW) and NetWeaver BI products, as well as those of newly acquired Business Objects, including Crystal Reports.

"This was probably just as well, because SAP sites had significantly more complaints about missing functionality, difficulty of use and query performance than the norm," said the report.

SAP also fared badly in measures of deployment success. SAP BI/BW joined Crystal Reports and Infor Alea sites as the least likely to achieve business benefits. In fact, the report made specific mention of the fact that SAP BW sites had consistently reported the lowest business benefits in each of the six previous survey years.

Conversely, BOARD, Panorama, Cubeware, arcplan and Microsoft AS sites were most likely to report that they had realised benefits. And proving that size is no indicator of product quality, it found the best-known BI vendors did not provide the best product support. Business Objects and Hyperion were well below average and Cognos, Oracle and SAP were also below average. The best support was reported by customers of small regional vendors like Cubeware and BOARD, with Information Builders, Applix and MicroStrategy also doing well.

Microsoft was rated just above average.

While projects led by specialist BI consulting firms were the most likely to realise business benefits, closely followed by projects led by business end-users. Those led by large, general-purpose consulting firms and vendor consultants were the least likely to deliver benefits, which was also consistent with previous years. Another consistent trend is that business benefits were most likely to be achieved if projects went live within three months.

Based on the analysis of actual experiences of some 1,900 users worldwide with median revenue of just over $500 million (254 million), Europe made up 52.9 per cent of the countries surveyed. Banking, insurance and retail retain the top three spots in terms of industry representation. But public sector organisations came much higher than usual this year, while the automotive industry also had a relatively larger sample.