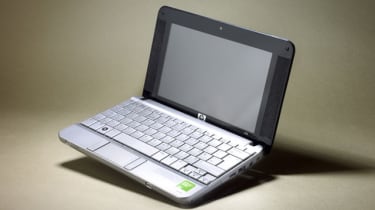 Since its release in the tail end of 2007, Asus' tiny little Eee has won itself plenty of admirers. Tiny, light and inexpensive, for people on the move, it's all the laptop they need. Sling it in a bag, and you'd hardly notice it was there, and yet it's still more than capable of the basic, everyday tasks required of it - internet, email or just a spot of word processing.

But despite several manufacturers making half-hearted attempts to recreate its success by rebadging VIA's NanoBook design, the Eee's diminutive charms have been enough to help it retain a firm stranglehold on the sub-notebook market. Well, until now at least.

It's been a long time coming, but HP has unveiled its take on the genre with its long-awaited Mini Note 2133. And, let's get this over with straightaway, it makes the Eee look and feel positively cheap in comparison. We handed the 2133 to a couple of our colleagues and let them play with it for a minute or so. Then we told them how little it costs. Cue looks of complete and utter disbelief.

It is, without doubt, a simply beautiful laptop. Pluck the 2133 from its dumpy brown cardboard box and the magnesium alloy immediately feels classy and - more to the point - expensive. Considering its petite 265 x 165 x 33mm dimensions, though, it doesn't feel quite as light in the hand as you might expect. Tipping the scales at 1.27kg, the Mini Note weighs almost as much as the likes of fully-fledged ultraportables, such as NEC's Versa S9100 and Lenovo's X300.

But, let's be honest, 1.2kg is still far from overweight, and that weight also serves to make the 2133 feel impressively sturdy. Compare it to the plasticky, slightly creaky frame of the Asus' Eee, and it's in a different league entirely. There's a little flex in the base if you really tug at it, but the display is incredibly rigid and offers the 8.9in panel plenty of protection.

We prodded and poked at the lid as hard as we could, but to no effect. Similarly, grab the HP's tiny lid between two hands and, barring a tiny bit of give, it's startlingly resilient. If there's anything to moan about then, it's that the HP's bulletproof frame isn't matched by the slight wobble in the display's chrome-effect hinges, but it's no deal breaker.

Stop trying to physically assault the Mini Note's hardy little frame and you'll find it continues to impress in other key areas. We've moaned time and time again about the Eee's tiny keyboard, and it seems someone at HP has been listening. The 2133's silvery keys stretch right to the edges of its chassis, but apart from the shrunken Function keys and the diddy little cursor cluster, all the alphanumerical keys are, amazingly, full-sized.

There's not quite the depth of travel that you'd find on larger laptops, or desktop keyboards for that matter, but in a laptop this size, the positive feel and comfy layout is by far the best we've encountered. If you're one of those for whom the Eee's keyboard was just that bit too small, then the HP boasts the keyboard your fingers have been waiting for.

That keyboard comes at a cost though. With only a thin strip of chassis left fallow below the fine keyboard, the buttons are forced to either side of the trackpad. It's a change born of necessity, but it takes a little getting used to. If, like us, you're accustomed to guiding the cursor with a finger, and resting your thumb on the left button, poised to make a quick click, then it can cause problems.

The HP's tall buttons are set hard up against the trackpad too, so if you rest a thumb on the leftmost button you'll find that same thumb leaning across the trackpad's bottom corner and occasionally interfering with the cursor.

The light, indistinct feel of the buttons doesn't help matters either, though in its favour, HP has wisely included a button to disable the trackpad, to prevent errant thumbs pushing the cursor around whilst typing.

The trackpad may be a little disappointing, but the Mini Note's display goes some way towards making amends. It shares the same 8.9in diagonal of the Asus Eee PC 900, but where even Asus' premium Eee has to make do with a 1,024 x 600 pixel screen resolution, HP's answer boasts a glossy 1,280 x 768 panel.

There's no hint of the slightly grainy quality on Asus' panel either, and instead the 2133 provides image quality that is bright and crisply defined.

Cast your eye around the 2133's frame, and it's rather well appointed with ports and connectors. Look to its left-hand edge and you'll find USB and VGA ports, along with the usual headphone and microphone sockets. Look to the right and there's Ethernet, an ExpressCard/54 slot, an SD card reader and another USB port too. Wired connectivity is complemented by Bluetooth and 802.11bg Wi-Fi.

In the UK, HP offers the Mini Note 2133 with the choice of Linux, in the form of Novell SUSE Linux Enterprise Desktop 10.1, or Windows Vista Business. Both the SKUs have the same core specification, but the Windows Vista version adds a 6-cell battery and makes up for Microsoft's licensing costs with a 50 price hike.

Our test unit came with Novell's Suse Linux 10 pre-installed, but unlike Asus, HP has made zero attempt to customise the installation to make it more accessible to beginners. If you've never used Linux before, that may make for a daunting first few hours with the 2133.

HP has installed some software to get you started, with familiar faces such as the fine OpenOffice 2.3 and Mozilla FireFox rubbing shoulders with a lesser known email client, photo viewer and music player, but if you find something lacking, and aren't versed in Linux's arcane installation procedures, some tearing of hair will ensue. And frankly, although we count ourselves as experienced PC users, we missed the delightful simplicity of the Eee's Xandros Linux install.

But, even if we pretend for a moment that every prospective user is fully conversant with SUSE Linux in its unsullied form, the 2133's downfall comes courtesy of its limited processing power.

Look to the heart of the 2133, and its core specification certainly looks enough to leave the Asus Eee trailing in its wake. An ultra low-voltage VIA C7-M processor nips along at 1.2GHz and it's partnered by a gigabyte of memory and a 120GB hard disk.

But while its specification looks great on paper, it's decidedly sluggish in use. The Eee 900's 900Mhz Intel Celeron processor, partnered with the snappy solid-state disk, made for a system that was surprisingly responsive. Storage permitting, playing back DivX movies was well within its capabilities, and whether you opted for the Linux or Windows XP versions, programs sprung into life with appreciable haste.

The HP's VIA processor, in comparison, causes even lightweight programs like OpenOffice to slouch sullenly into view. And never mind DivX playback as, not only is there no compatible media player pre-installed, the 2133 struggles when confronted with the challenge of viewing a YouTube video in full-screen mode, let alone anything more demanding.

We're eagerly waiting to see how the Vista Business version stacks up, when it finally arrives, so we'll post up benchmark results the moment we have them. But, knowing Vista's penchant for crippling low-powered processors and greedily gobbling up memory, we don't expect it to change our opinion.

The 2133's battery life hammers the final nail into the HP Mini Note's magnesium alloy coffin. Sitting idle, with wireless off and the screen set to medium brightness, the three cell battery died one minute shy of the two hour mark.

Turn wireless on, and try using the HP however, and you can expect that to drop to little over an hour. Opt for the 6-cell battery, and stamina will no doubt improve, but its extra capacity will leave it jutting from the 2133's slender rear and add to the weight too.

HP's Mini Note 2133 is a flawed gem. In many regards, it's superb. It looks and feels vastly more expensive than it is and is outstandingly usable for such a tiny laptop. But, while the chassis is excellent, we can't help feeling that HP has comprehensively missed the mark with both the software and hardware. One of the principal attractions of the Eee PC is its supreme user-friendliness; a trait which the 2133 sorely lacks.

Replace the decrepit VIA processor with one of Intel's forthcoming Atom chips or, dare we say it, add a Windows XP version to the lineup and, for many people, the 2133 would have little trouble in deposing the Eee from its pearly white throne. But until the HP can boast battery life and performance ample enough to match its finely honed figure, Asus' Eee will remain our budget laptop of choice.

It's stunningly good-looking, impressively usable and keenly priced but, for now at least, poor performance and mediocre battery life leave the Eee on top.