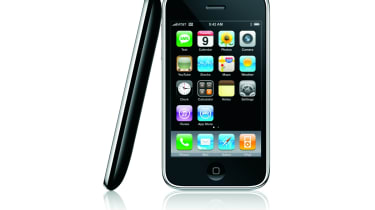 It was the worst-kept secret this year, yet Apple still managed to impress with the launch of its 3G iPhone smartphone late last night.

Coming just under 18 months after the original iPhone was unveiled at the 2007 Macworld event, the Mac maker has given the device a much-needed hardware overhaul, addressing many of the requests for features and complaints about the original levelled by users.

Cosmetic changes have been kept to a minimum, and barring a shift to an all black casing (with an option for a white 16GB model), the device looks very much like the original, and will use the same software as its 2G counterpart. However, the electronics of the iPhone are much better.

The 3G iPhone is a quad-band GSM device with tri-band 3G and HSDPA data support. The camera remains unchanged at two megapixels. A GPS receiver has been added, allowing for geotagging of photos and messages, as well as more accurate mapping and route planning, Built-in 802.11b and g Wi-Fi is still present and can still be used for location triangulation.

The iPhone will be available in both 8GB and 16GB configurations. The 8GB is black, and the 16GB offers a choice of black or white.

On the software side, the phone has gained a number of business-friendly features, which will also appear in the next firmware release for the 2G iPhone and iPod Touch next month. Support for Microsoft Exchange push email is present alongside IMAP and POP3, as well as ActiveSync to allow for address book and calendar synching with Exchange servers.

The iPhone will also be able to read iWork documents and Microsoft Office PowerPoint presentations, in addition to its existing support for Word and Excel. Editing is still not possible.

IT managers can also control what third party applications are downloaded to the iPhone, and create centralised intranet download points for internally developed iPhone applications. For both business and consumer users, applications of 10MB and under will be downloadable over a mobile phone data connection, apps larger than 10MB will require a Wi-Fi connection in order to download. A link to the new iPhone apps store will be placed on the desktop of both the 3G iPhone and 2G iPhones running the 2.0 firmware.

"iPhone 3G supports Microsoft Exchange ActiveSync right out of the box, runs the incredible third party apps created with the iPhone SDK, and will be available in more than 70 countries around the world this year," said Apple's chief executive Steve Jobs.

The 3G iPhone will go on sale in 70 countries on 11 July, including the UK, where it will continue to be carried by O2.

The 8GB handset will cost 99 inc VAT on the basic 30 and 35 a month airtime plans, and will be free on the 45 and 75 plans, confirming that Apple is allowing mobile operators to subsidise the handset price for the first time, in line with other handset makers. The 16GB model will cost 159 on the 30 and 35 plans, 59 on the 45 plan and will be free on the 75 plan. All contracts are 18 months in length.

There are plans for a pay as you go option as well, though pricing has not yet been confirmed. Business users get two tariff options, one for small businesses and one for larger enterprises.

Also announced during the keynote was a long-overdue revamp of Apple's .Mac hosting package, to be renamed Mobile Me.

Users will receive 20GB of storage, double what they received as part of the .Mac package, while data such as photo galleries, address books, calendars and push email will be accessible from and synched across Macs, iPhones and iPod Touch units, as well as Windows PCs. Previously data could only be synched with Macs.

Mobile Me will cost 59 per year for a single user, including VAT. Existing .Mac subscribers will be moved to the Mobile Me service over the next two months.