Just as the IT industry digests the impact of software as a service, Citrix touts its desktop as a service products and vision to UK customers. 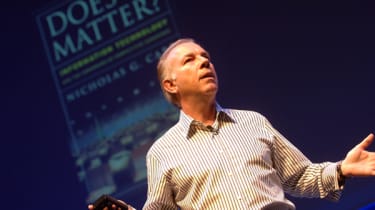 Citrix has today outlined its portfolio of new and updated products for delivering applications in the cloud or through a distributed environment, including a new appliance capable of delivering the "desktop as a service" (DaaS).

The application delivery specialist vendor is in Edinburgh this week to outline how its latest product releases have taken inspiration from the satellite TV industry, according to Mark Templeton, Citrix president and chief executive.

He said: "Digital TV is a good role model because it operates with a simple, fast on-demand experience that works every single time. But the organisations that control the service delivery are separate to the providers of the content. Delivery is device, network and application independent, allowing you to also install Apple TV alongside your Sky service, for instance."

Key to this vision for delivering enterprise applications in a distributed computing was the introduction of XenDesktop, which Templeton said added to its XenApp (formerly Presentation Server) application streaming capabilities and would allow IT organisations to dynamically assemble and disassemble users desktops on-the-fly, using a single master store of applications that is separate from the operating, policy and permissioning systems.

The XenDesktop appliance would evolve the concept of the thin client or virtual desktops with its in-built memory, graphics and application processing components, added Templeton, by also embedding the Citrix desktop receiver (which can also be downloaded to home-based Macs or PCs) into the desktop to improve application streaming performance.

"It's just like being at your desktop, wherever you are, without all the hardware components, which has obvious benefits in terms of longer life, minimal maintenance and lower energy consumption," Templeton said.

Tiered pricing also announced today starts with a trial, Express edition for free with up to 10 concurrent users and goes up to a Platinum edition, at $395 (201.50) per concurrent user and also includes Citrix virtual desktop infrastructure, desktop and provisioning pooling, XenApp and DaaS components. But existing XenApp users can also upgrade to the full, Platinum DaaS capability for $95 (48.46) per concurrent user.