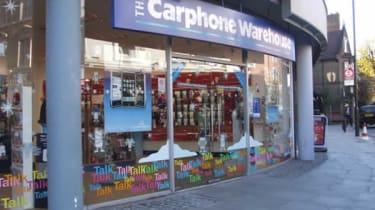 Carphone Warehouse has worried the City after releasing a downbeat sales assessment in the wake of weakening broadband sales.

The mobile phone and telecoms services provider saw its shares slump an initial 18 per cent, after announcing broadband net and gross additions were lower than expected, due to the slowdown in the housing market and a strong performance in mobile broadband sales.

The company sells broadband under the TalkTalk and AOL brands in the UK and has been offering a number of incentives to boost 18 and 24 month contract connections including bundling laptops with new sales.

Carphone said the year had started well for its mobile retail business, with mobile connections in the first 10 weeks up 12 per cent year on year, compared with its growth target of eight to 10 per cent.

"The environment is difficult for everyone and everything at the moment," Finance Director Roger Taylor said, without giving any specific details on broadband numbers. "Our business model is as robust as we can be. (But) maybe people are thinking now isn't the time to sign up to something."

The group said, however, that churn, or the number of people leaving the service, was also falling and therefore it had not changed its financial guidance.

"If these trends continue, we expect lower revenue growth this year than previously indicated, compensated by improved margins," the group said of its fixed-line business.

It said its overall outlook for the year ahead remained cautious, given the poor economic climate and inflationary pressures on European consumers.

The retailer and broadband supplier posted headline pretax profit in line with market forecasts, up 75 per cent at 216 million, reflecting the reverse of last year's steep losses incurred as it launched free broadband. Group revenue was also in line at 4.47 billion for the year to 29 March.

Analysts said the cautious outlook was likely to hang over the share price, but Daniel Stewart analyst Mike Jeremy said he thought the reaction was based on a short-term view.

"I think the reaction is short-termist, with the key words being cautious and the recent numbers on broadband, which indicate a slower rate of connection," he said.

Carphone has grown profits in the last year by moving broadband customers off rented BT lines and on to its own network, and it said it expected to continue this through 2009. It had 67 per cent of customers on its own network by the end of March 2008 and is targeting 80 per cent by March 2009.