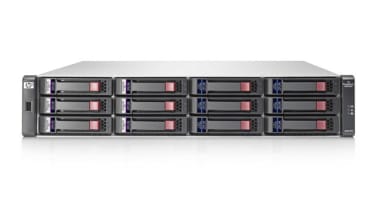 An automatic vdisk creation option is provided where you just answer a few simple questions but we opted for manual control where we could select the array type, the preferred controller and the number of volumes it should have. If you wish you can allow the controller to create equal sized volumes and then you name them and decide if they should be available to all hosts.

Before hosts can have access to volumes the iSCSI host ports on the controllers need to be configured. Here, you can provide an IP address for each one, add the location of any iSNS servers and activate CHAP authentication as well. You then need to map volumes to specific host data ports and you can hard set read and write access as well.

Snapshots for point-in-time volume copies are supported and these are stored in a snapshot pool on the appliance. An eight snapshot license costs around 369, whilst 64 will set you back 1,005. Full support for Microsoft's MPIO (multi-path I/O) comes as standard. This uses multiple hardware components to create redundant paths from hosts to storage volumes and HP includes its DSM (device specific module) as standard.

We then added a Dell PowerEdge 1950 equipped with dual quad-core 1.86GHz Xeons and logged this on to a separate volume through the second host port. With Iometer running on both systems we saw a cumulative throughput of only 151MB/sec showing clearly that there was some contention for resources even with the two hosts assigned to different ports and both RAID controllers installed.

Moving over the 2212fc we found nearly every procedure is exactly the same as for the iSCSI version. Vdisks define physical drives and RAID arrays, they contain multiple volumes and controls can be used to restrict host access using WWNs instead of IQNs all very simple indeed.

To test performance we introduced the 2212fc to the lab's 4Gbps FC SAN. Our two test servers were also equipped with LSI 4Gbps 7204 FC HBAs and we had no problems accessing the virtual volumes. Performance on one host was impressive with Iometer reporting a speedy 375MB/sec. We assigned a second volume to the Dell server and ran Iometer on both systems. This test returned a cumulative raw read speed of 515MB/sec showing clearly, as with the iSCSI appliance, that contention for resources was occurring.

HP clearly lay down the gauntlet to vendors such as NetApp and EMC who will find it nigh on impossible to compete on price with these new FC and IP SAN solutions. We have some concerns over performance under load but the 2000 series of appliances offer a good range of features, are particularly easy to install and manage and have plenty of expansion potential.

HP’s latest network storage appliances are competitively priced making them an affordable option for SMBs looking for an FC or iSCSI solution with fault tolerance on tap. Installation is very streamlined and expansion potential looks good but although performance is reasonable our tests do show they won’t cope well with a heavy demand.