Top handset maker Nokia believes the E71 and the E66 will take mobile email to the next level, and announces plans for a touch-screen model soon. 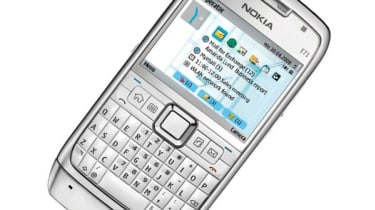 Mobile phone market leader Nokia has formally unveiled its latest business handsets - the E66 and the E71, which will go on sale next month.

News of the E66, a business "slider", and the QWERTY-style E71 was widely leaked on the internet. However, Nokia has now formally revealed details of the handsets that it believes will take mobile email uptake to a new level. (For photos of both phones, click the gallery tab above.)

Both the E66 and the E71 use Nokia's Symbian-based S60 operating system and come with HSDPA, 3G, EDGE and WiFi connections as standard, as well as Assisted GPS.

Nokia has also boosted the camera in each phone to 3.2 megapixels, and added full support for its Ovi entertainment and content services. The phones can also be set up with two "home" screens, each with customisable options, for business and personal use.

The handsets can also be managed using Nokia's Intellisync management software. As an additional security measure, individual business users or consumers can wipe the device remotely using a secret, coded SMS. This can also be set to trigger a remote wipe after multiple incorrect password attempts.

In-device security has also been upgraded, to include hardware-based, full device and memory card encryption, as well as support for AES. Nokia has also included a VPN client for secure connections to company intranets.

Ease of use improvements include automated set-up for "over 1000" internet-based email accounts, as well as simplified account creation for Exchange and Lotus email users. This, Nokia hopes, will overcome some of the remaining barriers to mobile email, as well as reducing the support burden on smaller companies' IT departments.

"We have sold 10 million E-series devices, but we have come to realise that it is time to move beyond work-related issues and what is mostly an adequate email screen," said Soren Petersen, senior vice president of devices at Nokia. "We realise that people have different needs, and different ways that they approach work." This, he added, is why Nokia allows users to customise devices, and also why the company has both QWERTY and "view and consume" business handsets such as the E66.

Sorensen added that Nokia would continue to develop email-capable devices, possibly including dual-SIM support for home and personal use and also the development of consumer-oriented QWERT handsets. He also confirmed that Nokia would release a touch-screen phone "later this year," but did not give further details.