With the Asus Eee PC on its third iteration, Acer is hoping to make a splash with its Aspire One. 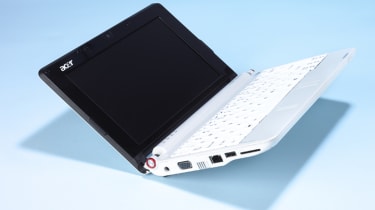 Asus' Eee range might have had an easy ride for the last few months, but the challengers are arriving thick and fast. Now Acer's Aspire one has landed, can it finally mark the end of Asus' dominance, or is it just another jumped-up pretender?

Before we go any further, let's get this out of the way; the Aspire one is absolutely gorgeous. It doesn't share the HP Mini-Note's extravagant metal shell, but slip it from its tiny box and it's got curves in all the right places. Our review unit came in pearly white, but it's also available in a rich shade of royal blue, a welcome contrast to the plain black and white of the Asus Eees. Whatever colour you eventually choose, though, the smooth lines and the little flash of colour on the lid's hinges all coalesce into a surprisingly attractive whole.

And when you glance at the Acer Aspire one's price, that surprise may just spill over into amazement. Where other manufacturers have ignored the Eee's humble laptop-for-200 beginnings, and consequently found that their 300+ price tags are treading on the toes of fully-fledged laptops, this, the most lowly of Acer's five specifications, costs just 191. It also offers an assortment of hardware and vital statistics that easily trumps Asus' most frugal of Eee PCs, the 701.

The basic specification consists of one of Intel's Atom N270 processors running at 1.6GHz, 512MB RAM, an 8GB solid-state drive, 802.11bg networking and Linpus Linux Lite as the OS of choice. It's not a specification to get the pulse racing - we'd have liked Draft-N and Bluetooth - but given the modest demands of Linpus' OS, it's still plenty enough for the core tasks expected of it - mail, word processing, internet browsing and media playback.

And, talking of the OS, Linpus Linux Lite shows some promise. The front end isn't visually as neat as that of the Asus Eee, but it does much the same job. Programs are divided into four main headings: Connect, Work, Fun and Files. The usual suspects such as Mozilla Firefox and OpenOffice are present and correct and Asus has opted to use its own proprietary email client, dubbed Aspire one mail.

OpenOffice springs into life with appreciable haste and, in contrast to HP's Mini-Note 2133, video streams smoothly from Youtube or Blip.Tv in full-screen mode. There's the odd stutter now and again, and some videos seem a little jerkier than their windowed counterparts, but it never renders anything unwatchable.

Disappointingly, though, DivX's and .VOB files refused to play with the supplied Mplayer software, which claimed to lack the suitable video codecs. We hope this is an omission which will be rectified in production models.

Should you need a bit more flexibility than the basic spec allows for, or would like to dump Linpus in favour of Windows XP, Acer has provided a sensible range of models to choose from. Take a glance at the CCL Computers website and you'll find the pricing is very reasonable indeed. Add a modest 5 to the 191 starting price and you can opt for a substantially less shock-proof, but far more capacious 80GB hard drive instead.

Add another 17 and you can upgrade the 512MB RAM to a full gigabyte. And if you'd rather have Microsoft's XP Home installed, two models are available: the version with an 80GB HDD and 512MB RAM will set you back 238, and upping the memory to 1GB sees the price rise to a still competitive 255. With 3G and WiMax options coming some time in the near future, the Aspire one sitting in front of us looks to be the first in a very strong lineup.