HDS' IP SAN appliance is designed for small businesses. Can if deliver in the performance and value stakes? 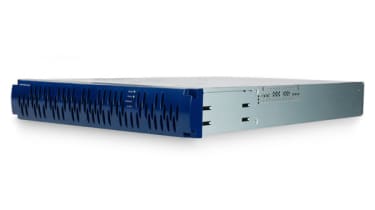 IP SANs have been enjoying a meteoric rise in popularity as SMBs are viewing them as a far more cost-effective alternative to FC SAN products. We've seen a large number of storage vendors joining the iSCSI club over the past few months and now the mighty Hitachi Data Systems (HDS) wants a piece of the action as well.

Its latest Simple Modular Storage (SMS) solution stands out from the crowd for number of reasons. Not only does the SMS-100 aim to offer SMBs affordable network storage but it comes straight out the box without a single point of failure. The key concept with this appliance is that it has been designed to do away with the need for users to hot-swap any failed components.

The system supports up to twelve hard disks but none of them are hot-swappable. The chassis has twelve drive bays at the front but removable covers are positioned on each side for two drives only and these two repair' bays are always empty regardless of the capacity chosen. That's leaves ten slots at the front but HDS has secreted two more fixed drives in separate bays underneath the lid.

The SMS-100 supports both SAS and SATA hard disks and HDS offers three configurations where you can have six, eight or twelve drives fitted. HDS is also playing the green card, although power efficiency isn't great as with only six drives installed our in-line power meter showed the appliance pulling nearly 300W when under load.

Irrespective of the specification all drives are configured only as a RAID-6 array, which provides dual drive redundancy. Essentially, if one fails, the appliance notifies you by email and you order a new one which you slot into either of the repair bays at the front. If another one goes down then you carry out the same procedure using the remaining bay. Users are not required to touch the failed drives which are simply left in their respective bays.

In the unlikely event of another drive failure you contact HDS which sends out a complete new appliance. The RAID controllers have an auto-migration' SAS port at the rear, which you connect to the new unit using the supplied cable kit and initiate a complete copy of all data from the degraded unit. This could take a few days but the primary unit is not taken offline until the copy has finished.

You then promote the new system to primary status, switch off the old unit and ship it back to HDS. This even applies to power as the unit is completely replaced if one supply goes down. The same philosophy also applies to the RAID controllers as these are not user replaceable either. You can start with one but if you want a second then a new appliance is supplied suitably attired and you carry out the same process of copying data across to it before sending the old one back.