HTC has touted the Touch Diamond as an iPhone killer? But is this Diamond shiny enough to distract anyone from picking up an Apple? 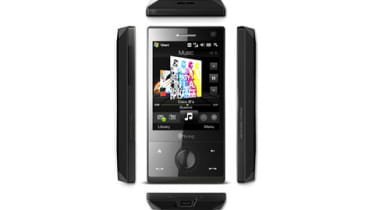 If you believe the hype then what I have here in my hand is the iPhone killer the phone that everybody has been waiting for to give Apple a proper run for its money. Except of course, it isn't. To be fair HTC nearly gets it right but predictably it falls short of the mark. In the UK Orange and T-Mobile will be carrying the phone but as yet prices have not yet been confirmed.

HTC was the first to respond to Apple's iPhone with the introduction of the Touch, which introduced an interactive sliding interface on top of the standard Windows Mobile shell designed for fingers rather than a stylus. With the Touch Diamond the TouchFlo interface is wizzier than every, but a stylus still lurks in the bottom right hand corner and there's no doubt that you'll still be using it on a regular basis. At least taking the stylus out turns on the screen automatically, which is a nice touch.

As far as specifications and features its hard not to be impressed with what the Touch Diamond offers - even more so when one actually sees the size of the device, which its dimensions of only 51mm x 11.5mm x 102mm. It also weighs only 110g, lighter than many regular consumer phones.

In fact if anything, it's too light. While it's compact and smooth, the actual build quality does leave something to be desired and the cheap plastic finish doesn't impart an impression of a solid business device. In fact, removing the phone from my pocket in the pub while testing garnered a reaction of, "what's that, it looks like a toy!" from a colleague. However, there's no arguing with the uber thin profile, which makes it easy to slip into a pocket and pleasant to hold.

Despite the size, the Diamond is brimming over features wise. It's powered by Windows Mobile 6.1, the main benefits of which are concerned with the default Windows Mobile home screen. However, as TouchFlo 3D is present these benefits are rather redundant anyway. You do get threaded text messages at least, though certainly the presentation doesn't match the iPhone.

HSDPA 7.2Mbps support means it should go as fast as your network allows, and HTC say that HSUPA is supported, which should please T-Mobile customers. One issue though is that the 3G frequencies it supports are 900 and 2100MHz, which means that it won't work at 3G speeds on the USA. A US specific version is going on sale but if you want to roam in the States with it, you won't be able to do so at 3G speeds.

802.11b/g Wi-Fi and Bluetooth are present as is GPS, which integrated nicely with Google Maps, though that had to downloaded and installed separately.

The display is 2.8in in diameter with a very impressive 640 x 480 resolution - there's a front camera for video calls and a 3.2 megapixel rear facing camera. The memory complement consists of 256MB of ROM, 192MB of RAM and 4GB of internal storage. What's missing however is an external SD card slot so there's no way of adding to this storage.

Perhaps to justify the name the rear of the phone feature a quite clever cover, split into multi-faceted, diamond style triangles. The 3.2 megapixel camera is surrounded by a silver triangle, just in case you haven't spotted it. The only buttons are all oblong, one for power at the top and two for volume up and down at the side. The power button in particular has no travel to speak of making it awkward to turn on and off.

The Touch Diamond is of course keyboard free, though there are four buttons that sit underneath the display and flush with it.