If you want fast efficient scanning to archive documents the Xerox DocuMate 262i has to be on your shortlist. 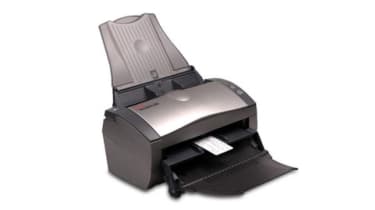 Business scanners have a very different purpose and design from their flatbed, graphic design siblings. Where flatbeds typically have high optical resolutions and are used for producing very high-quality colour scans, often of photographic originals, business scanners are much more concerned with high throughputs of text documents and are used primarily for OCR and document archival.

Xerox's DocuMate 262i is a neat scanner, about the size of a small bread loaf, and feels very solid and well made. Being sheet fed, it can only take individual sheets and can't scan from books or magazines, but it can deal with up to 38 pages a minute, according to Xerox. Since it's a two-sided (duplex) scanner, this translates to up to 76 sides per minute.

Paper feeds conventionally from a rear paper tray to a front one and the only controls are buttons to switch between simplex and duplex scans and one to select between nine different pre-defined scan modes there's a blue, single-digit display to show which one's selected.

The paper trays aren't ideally designed. The rear feed tray folds up neatly out of the way when the scanner's not in use, but unless we missed something, the front one doesn't. There's a choice of simple output tray or output tray with ID/credit card front feeder. This combination clip-on provides a small feed tray, which rests against the front of the scanner, so cards can be fed.

However, it has to be moved away from the scanner when scanning from the rear tray and Xerox has devised a slightly bizarre scheme using two spring-loaded latches which your rotate either side of the front feeder til they clip onto it and pull it forward. The latches have to be released again when you want to use the front feeder. How much simpler to have a simple peg or catch to hold the feeder in its forward position?

Xerox supplies full versions of Nuance PaperPort 11 for document management and OmniPage Pro 15 for OCR. Both are market-leading applications which do their respective jobs very well. You can OCR directly from within OmniPage Pro, though it's probably quicker and easier to scan and OCR as separate operations, using PaperPort.