Korean manufacturer adds 22in DisplayLink powered monitor to its line up enabling easy addition of up to six additional screens. 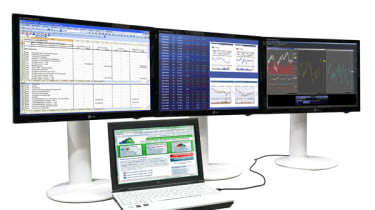 LG today announced the availability of its L226WU-PF 22in LCD monitor with integrated DisplayLink technology.

The monitor features DisplayLink's DL-160 circuit board, which makes it possible to add up to six extra displays via a USB 2.0 connection, technology that made its first appearance in the 20in L206WU.

"We're thrilled that LG is rapidly expanding its line of USB connected displays in partnership with DisplayLink," said Hamid Farzaneh, president and chief executive at DisplayLink. In-Stat research projects that USB network displays will exceed 26 million units and 40 million units in 2010 and in 2011 respectively, and LG is among the key forward-thinking display companies leading this major paradigm shift."

The L226WU-PF features 1,680 x 1,050 resolution, a 5:000:1 dynamic and 1,000:1 native contrast ratio and a claimed two millisecond response time for grey-to-grey movement of pixels. The display is also equipped with a standard D-Sub and digital DVI connections.