It's the second coming of the iPhone, and this time it's 3G. Some say it's the ultimate phone, but is it truly fit for business? 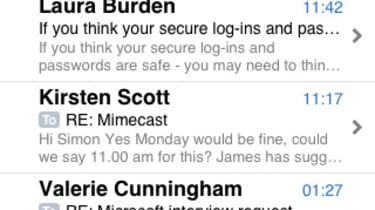 Having provided both a software development kit (SDK) ahead of launch and a corner of the iTunes store to act as both a shop front and delivery mechanism for add-on software, there is already a huge crop of business and consumer applications for download. Some are free, some are not.

Software has to be vetted by Apple before it is allowed onto the store, but on the plus side there is no charge for distribution.

Applications can be bought via a desktop iTunes client and then copied across to your iPhone during a sync, or you can choose, buy and download over the air using either a 3G data connection or Wi-Fi. Businesses wanting to restrict access to in-house applications can host and deploy from their own intranet site.

Is iPhone 3G is just the original iPhone in a shiny new shell? To a certain extent, yes it is.

However, this is not a negative but rather one of the biggest positives. The iPhone concept is a sound one, and existing users are happy with the way the iPhone works, with the touch screen interface and with the implementation of the standard software set. The only different thing needed was 3G in order to tap faster data connections. On top of this the iPhone needed to offer more functionality, not necessarily different functionality.

Both phones now use exactly the same software (the iPhone OS 2.0 software was released for the 2G handsets the night before the 3G one went on sale), which means they both have exactly the same core capabilities. For a company, this is great news as it means the IT department can now manage legacy iPhones as well as new ones.

If you already have an iPhone that isn't broken, why buy a new one?

If you are a heavy web surfer, then you will benefit from the iPhone 3G's improved data download capabilities.

Email heavy users should also consider devices with a hardware keyboard such as a BlackBerry or Nokia's e71 smartphone. RIM is about to release its first 3G device which will compete directly with the iPhone 3G in the business market. If you are comfortable with typing a lot on the iPhones on-screen keyboard, then faster downloads will be a bonus, though this is far less important for email than it is for web browsing.

The iPhone 3G is an excellent phone, as was the original.

It is important to understand that the iPhone 3G is a much-needed facelift and tweak, not a complete teardown and rebuild, especially if you are an existing iPhone user. For first-time buyers, the iPhone 3G offers better value for money as well as much-needed enterprise integration alongside the more consumer-friendly features like the iPod and the camera.

The iPhone 3G is an excellent smartphone and packs a great array of business-compatible features. However, aside from 3G and GPS, users of the existing iPhone should not expect to find anything other than that can’t be found on a 2G handset with the latest firmware.