As the MSI Wind lands, the final piece is the netbook puzzle slots into place. But how does it match up to its competitors? 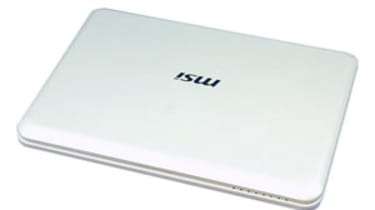 Much of the Wind's technological blueprint is startlingly similar to its rivals. But it's hardly surprising that the Wind and most of its ilk (HP's Mini-Note 2133 being one unfortunate exception) have adopted Intel's Atom processor. This, the top of the range Wind, boasts an Intel Atom N270 processor beavering away at 1.6GHz, backed up with 1GB RAM and an 80GB hard disk loaded with Windows XP Home. It's not a particularly potent combination, but with a score of 0.38 in our application-based benchmarks, it's clearly capable of everyday tasks.

The rest of the specification is perfectly serviceable. Wireless networking is catered for by 802.11bg and Bluetooth 2.0 - though there's no draft-n as found on the Eee PC 901 - and 10/100 Ethernet is present too. Three USB ports punctuate the sides along with a 4-in-1 card reader.

Much of the Wind's allure has, happily, remained intact since our first look, but the 4,400mAh battery has been supplanted by a frugal 2,200mAh three-cell unit. Battery life suffers as a result, and where the original high capacity model promised six or seven hours of light use, the 2,200mAh cell lasted minutes short of two and a half hours. Heavy usage saw that sink down to just over an hour and a half. Given the premium price, the omission of a high-capacity battery is more difficult to forgive than it is with Acer's Aspire one, but it's a tribute to the Wind's all-round brilliance that this doesn't dent its appeal too badly.

We weren't so forgiving of one of the Wind's more aggravating quirks though. Once our battery tests had drained the battery our review model simply refused to boot up again. One solution was leaving it to charge for quarter of an hour or so, and the other required us to remove the battery, unplug it from the mains and disconnect both battery and mains supply. A bit of a faff, in other words. Fortunately, a BIOS update on MSI's website , fixes the issue, but it's still disappointing that it slipped through the net to production models.

So, the Wind is, in the main, the breath of fresh air we'd hoped for all along. It looks good, feels good and its ergonomics are by far the best of the mini-laptop bunch. Its pricing brings it dangerously close to fully-fledged laptops, and leaves the value-for-money crown firmly in the Acer Aspire one's possession, but for less than a quarter of the Sony VGN-TZ31's cost, you simply cannot buy a better ultraportable.

A startling achievement: a capable, highly usable ultraportable for less than £300. Only mediocre battery life mars its appeal.