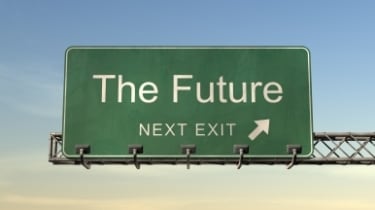 The 2015 equivalent of emoticons will try to convey tone and emotional content, perhaps with animated avatars of your face showing your mood and he suggests virtual worlds could move from entertainment to business and training tools. "Son of Son of Second Life may be the transactional environment of choice - not unlike the Neal Stephenson or William Gibson take on cyberspace but very much more human in scale and design. It's not that big a consensual leap from in-house IM systems and shared whiteboards and video."

A considerable increase in business use of video will contribute to the 15 exabytes of data a month Cisco chief executive John Chambers believes will be flowing through a variety of public and private networks. Video will become one of the standard ways of communicating information within the business - for visualizing data sets, for training and for collaboration, with high definition video conferencing and telepresence.

However, despite increasing energy costs and climate change concerns, we'll still be travelling to meetings and going on business trips. According to the Barclaycard Business Travel Survey, business travel will grow more slowly than the 30 per cent increase of the previous decade but we'll be spending five nights a month away from home rather than four and taking an extra flight each year. The difference is that business travellers will take more long-distance trips that last several days, and fewer short journeys for a single day away.

"Video will become pervasive inside enterprises," agrees Matt Glotzbach, director of products for Google Enterprise. "But as a complement to text-based collaboration - just as texting didn't replace the phone but augments it nicely."

The cost of producing video will fall so far that everyone will have one-to-one and multi-user video chat but crucially he believes that the cost of indexing video will also fall. "Because it's computationally expensive to index, it's been too costly for an enterprise to roll out large scale video usage. But by 2015 video becomes just as efficient, just as easy to index, as text. It isn't simply the transcoding of those entire conversations but the metadata and associated data. If someone is giving a presentation, the presentation itself, time stamped in the video, is a much richer set of metadata for finding key parts of content in that video. A lot of video in a business environment happens around an event so we'll be tying in the metadata of the event - who attended and where it was."

You won't have to sit through the video of a whole meeting though, says Ian Neilds of BT's research and foresight team. "When you record what goes on in a meeting room, the system will cut it down to the highlights."

Business users will be expecting high definition video at work, because they'll be used to it at home. Consumer technology will mean more experienced users but it will also set expectations. Laptop screens won't be enough for the video people will be using; Neilds believes that the 50" plasma screen, projector or active wallpaper that will be common in the home will reach the office, too.

With developments like this it's not surprising that US analyst firm Nemertes Research has predicted a massive slowdown on the Internet by 2010; it's more likely that the Internet will change to avoid problems. To deal with bandwidth issues, we'll see more private networks like the hi-definition video conferencing networks that Cisco and HP already have, using edge servers and a dedicated backbone rather like the points of presence' once run by ISPs along with smarter network management by ISPs and network operators including adaptive QoS. On the hardware side, faster switches with optical interconnects and the lessons of Internet 2 and the Lambda Grid will speed things up.

Business networks will run at over 50MBps and mobile networks will get faster too, using a mix of technologies including Wi-Fi, WiMAX, LTE and mesh; Gareth Williams of Orange's business solution team expects download speeds of 100Mbps, upload speeds of 50Mbps and we'll be uploading more from our phones than we download.

Web 2.0, 3.0 and all the subsequent waves of services and distributed systems won't have taken PCs off the desktop of 2015 - although the PC will often be a laptop and mobile devices like smartphones will be widely used too. With mobile contactless services for payments, ticketing, access to buildings, services and content, "your wallet, keys and phone will all be in one device" says Williams. It took 27 years to sell the billionth PC (that should be around the end of 2008), but there will be another billion PCs in use by 2015 if analysts Forrester are right.

By then, the processors in your PC will have many cores, some of them running standard PC programs the way a dual-core CPU does today - but the others will be dedicated cores for networking, VOIP, media processing, 3D graphics rendering, physics processing, handwriting and speech recognition, XML processing, security and reliability scanning, encryption accelerators and other specialized functions.

Even on an Intel chip, some of those cores come from partners and although AMD has had open interconnects for longer, many of the building blocks come from the same partners for both architectures. With 12 nanometer silicon and eight billion transistors a CPU could have 24, 96 or even 288 cores by 2015, according to Intel fellow Shekhar Borkar.

Expect fewer cores for desktop and mobile systems and far more on the server. There will be a gigabyte or more memory on the chip, acting as system memory and cache as necessary. Another billion transistors in the CPU do nothing but manage the rest of the chip to detect hardware failures and shift the work to another core. The first optical interconnects within the chip speed this up.