LG claims the W2252TE is the world's most power efficient 22in monitor. But is it, and is it suitable for your business? 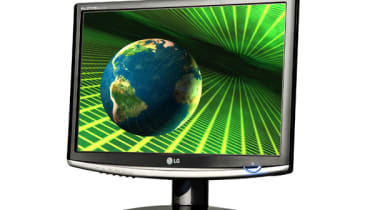 Running our demanding DisplayMate tests in turned in a decent performance, particularly with greyscales. There was a hint of compression with the whites and some banding was evident in the 256 intensity level ramp test, but I've seen worse. Colour purity and scaling were adequate too.

The display is based on TN technology, which is cheaper to produce but traditionally suffers from poor viewing angles. There is certainly colour shift as you move to the sides, but it's actually not too drastic and it's only really an issue when you move vertically up and down, which is why having a tilt feature is essential.

A headline figure that LG is banding about that is clearly designed to attract attention is the 10,000: 1 contrast ratio however, that's this is a dynamic figure with a 1,000:1 being given for its native contrast figure. Subjective viewing revealed slightly better than average levels of detail in darker areas, but I wouldn't categorise it as revolutionary, so I'd take those figures with a pinch of salt. Movement was also dealt with well, thanks to the speedy response time of the TN based screen technology.

What we got the monitor in to look at though was that power consumption figure and by plugging in a power meter, we were pleased to find that it drew only 18W from the plug, rising to a maximum of 19W and 20W as more movement appeared on screen, and making the liquid crystals work ever so slightly harder. Comparing this to a 17in monitor next to it, this drew 26W, while a 22in display drew fully 35W. Even with a single display this should translate to a real saving over the course of a year and if you were to extend this to a company level, the savings could be very considerable indeed.

Overall, this is a good monitor that offers decent image quality and lives up to its energy saving claims. The main issue though is that that the styling and feature set of this display are clearly aimed at the consumer market, which would make it an unlikely choice for all but the most green committed businesses. With the potential for energy cost savings the business world should be crying out for a display that meets its needs, with more convention styling, sturdier build quality and height adjustment at the top of the list. If LG doesn't get there first, it's pretty likely that someone else will.

Verdict: Though LG’s 10,000:1 contrast ratio figure is rather fanciful details in darker areas are above average at this price and overall the Flatron W225TE delivers good image quality. In our tests it lives up to its claims as the monitor with the world’s lowest power consumption but while the picture will give sterling results for general office use, the styling is unlikely to sit well in a business environment.