It’s cheap, it’s green, but is it legal? Miniframe's unique approach to thin clients lets multiple users access a single Windows PC, but check your licences before you drive. (UPDATE! Yes, it's legal.) 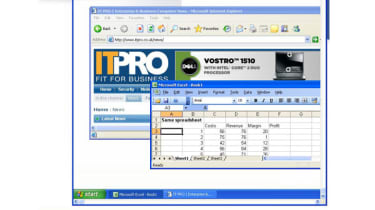 SoftXpand does some tricks to optimize performance. It manages CPU usage to prevent a single application grabbing all the processor time, and it reduces the number of frames per second to get better graphics performance. Unlike most remote desktop solutions, it is possible to run 3D games or CAD rendering software in SoftXpand with hardware acceleration, though you have to be realistic: if several users try to render complex drawings simultaneously performance will suffer.

There are other caveats. The first is the physical inconvenience of all the cabling and the enforced proximity of the workstations. Second, not all applications are compatible. MiniFrame maintains a list of tested applications, though many others will work fine. The main requirement is that applications must play nicely with Windows profiles. An app that keeps all its data in Program Files will not run well multi-user. Third, only 32-bit Windows XP is supported.

The big win is cost and power consumption. Instead of six PCs you buy one, although with as high a specification as possible. SoftXPand was developed in Israel, but according to its distributors it is proving popular in the UK, mainly in education but with increasing business interest. Ideal scenarios include classrooms, training suites and call centres. A great feature for training and support is that administrators have remote access to other SoftXpand sessions.

Could SoftXpand replace standard corporate desktops? It is possible, but uncertainty over application compatibility, physical limitations, and the awkwardness of managing multiple 6-user SoftXpand PCs make this less compelling than systems like Sun Ray, which run over Ethernet and are designed to scale smoothly. Apparently, MiniFrame originally designed SoftXpand for use in developing countries, and has been surprised by its popularity elsewhere, which explains why important features like Group Policy support have only appeared recently.

There is also the difficult question of software licensing. In most cases, SoftXpand will happily enable a single installation of, say, Windows XP and Microsoft Office for six concurrent users. MiniFrame UK advertises "Save money on purchase of software licenses" but adds in small print, "subject to license agreements."

Significantly, Microsoft deliberately restricts Windows XP to a single session, and has a separate Terminal Server product which runs on Windows Server. Roger Anscombe, Managing Director at MiniFrame UK, could not give us a definitive answer on how such a system should be licensed, but suggested a single XP license may be sufficient, but probably with multiple application licenses.

However, when we approached Microsoft to comment we were told clearly that using SoftExpand in the manner Miniframe intends would be a violation of its licence agreement, which would be rather a fly in the green ointment. Following our inquiry, Microsoft actually stated that it had been in contact with Miniframe (though it actually referred to the company as SoftXpand) to inform them of this but Miniframe's CEO insisted that in fact it had had no contact from Microsoft. (see quotes on page 3).

As such, while we've can't question the ingenuity of the technology in SoftXpand there are as it stands question marks over its legality. However, given the increasing importance of power saving, by forbidding the most efficient use of its software, a vendor such as Microsoft surely would have an ethical case to answer.