As Sony Ericsson's profits crumble, we ask what's become of the formerly profit making company and look at what it needs to do to recover. 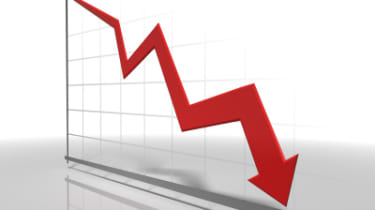 Of course, while the economic conditions are affecting all parts of the market, it has had less impact on the likes of Nokia. "Its broader portfolio of lots of low-end devices has enabled it to mitigate the softening," says Leach.

In contrast to Sony Ericsson, LG's results paint a very different picture. It's Secret, Viewty and Venus brands have helped it increase its second quarter sales by 15.7 per cent over the first quarter, taking 9.1 per cent market share, which has seen it overtake Sony Ericsson to become the world's fourth largest handset maker with struggling Motorola's third position firmly in sight. "LG has its mix of products just right," says Leach.

According to Leach, what Sony Ericson needs to do is to get back into the business space, which the company plans to do with the Xperia, its first Windows Mobile device.

"In the past, it was a strong player in the smartphone market and it has edged away from that. If the Xperia delivers it could bring it back into the market," Leach says.

The active word there however is if'. Whether the Windows Mobile 6.1 based device can hold a candle to the iPhone 3G in this regards will remains to be seen.

When asked about whether it could get the company back on track Sony Ericsson's Costello said: "That's the hope and intent of the product. We're not trying to be a follower with the Xperia, or with the X1 brand. We're trying to take advantage of the user interface to create a leading multimedia and web device."

A further downside however for Sony Ericsson is that it's not scheduled to appear until the fourth quarter this year. In the mean time, it's clear that the company just has to ride out the current market conditions, and the recent job losses are an indication that it is trying to do that.

Of the recent cull of 2,000 jobs, Merran Wrigley, head of external communications at Sony Ericsson, told IT PRO: "We feel it's much more about right sizing, taking stock as a company , not just about cost saving. Reducing head count enables us to align for the next stage of growth."

As it stands, Sony Ericsson needs the Experia to re-establish its credentials at the high-end while its upcoming low-end phones aimed at emerging markets need to deliver serious volume sales. And it needs both of these to work.

As Costello admits: "Our competitors have not been standing still and we need to develop and improve. We need to capture new forms of innovation; outside of the usual Sony Ericsson thinking and we need to figure out how to make that brand even more compelling.

"We also need not to just take advantage of the phone itself but also create complementary services around the phone - online services. Digital content is an important part of our future strategy."

Whatever happens, the next two quarters could be crucial for the company.