Speech recognition and speech-to-text software has improved considerably in recent years, but can the latest version of Dragon cut it in the real world? 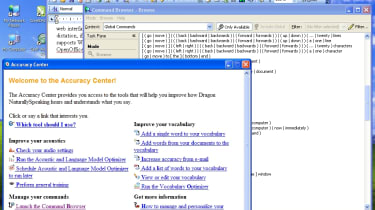 There are still some formatting niggles when dictating into Word one of our own pet gripes is that inserting quotes, speech marks or apostrophes doesn't use Word's typographical marks, but only the simplified, more utilitarian ones. Against this, you can now operate on sections of text, without having to first select them. Simply saying italic first' at the end of the last sentence, for example, would have changed first' to first'. Previously, you would have had to use the two commands select first' followed by italic that'.

Web facilities extend to popular individual sites, so you can search eBay for a filing cabinet or Wikipedia for details of just about anything. Some commands within the web interface have been changed, so there's less likelihood of inadvertently typing dictation, if a word processor is running alongside the web browser. DNS supports Word and WordPerfect (which still has a big US and UK legal following), but not OpenOffice. This is odd, since the overall installed base of OpenOffice probably outnumbers that of the Corel product by quite some way.

The Professional version of DNS 10, which comes in Standard, Preferred and Legal versions, too, offers control of Outlook, PowerPoint and Lotus Notes, which the Standard and Preferred versions don't. All versions now support Firefox and Thunderbird, as well as IE and Outlook Express.

DNS 10 Professional is more network aware, working with Citrix thin clients and making personal profiles and vocabularies available from any machine. The main advantage of the Professional product over the less expensive Preferred version, is its macro and scripting support, where you can define and maintain verbal commands specific to your environment and the applications you use.

In case you're wondering, yes this review was dictated under DNS 10 Professional in a fresh installation, with impressively few corrections needed for mis-recognised words (though a couple of US spellings slipped in, but we will blame the software for that Ed).

Nuance claims speed and accuracy improvements for the latest version of its speech recognition application. From our tests, both these claims are well-founded and Dragon Naturally Speaking 10 is an improvement on version 9. The extension of voice controls into e-mail and web browsing will be useful for many adopters.