RIM has hit back at competition from Apple’s iPhone and Nokia’s E71 with a high-end, feature-rich new handset that adds 3G and HSDPA to the BlackBerry for the first time. 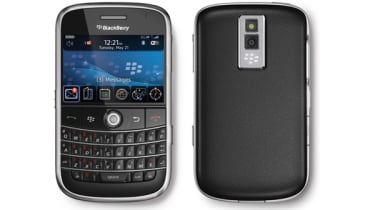 Software overhaulThe main application for a BlackBerry is email access, and not much has changed between the Curve and the Bold in this respect. The mail application was something that was in no way broken, and thus needed no major changes. Thus it has been left alone.

Users have the option to mate their BlackBerry to an Exchange or Lotus Notes server running the BlackBerry Enterprise Server (BES) plug-in, or to buy it from a mobile network that offers a Prosumer service, whereby the Mobile network provides the BES integration, and you configure, via a web interface, access to up to 10 of your POP3/IMAP and Exchange mailboxes. If your Exchange mail server supports Outlook Web Access (OWA) you should be able to configure push email to your BlackBerry.

Web browsing on a BlackBerry has never been a pleasant experience the browser was very basic, couldn't cope with any exotic scripting and mangled pretty much anything you loaded. It's now had a complete rewrite to support full-page browsing, meaning you can view proper web sites exactly as you would on a desktop PC. Like an iPhone, you zoom in on the area you want to read, and the combination of cursor and trackball makes this very easy, far easier than on Nokia's E71, and almost as quick and easy as a touch screen iPhone.

The 3G and HSDPA support soon shows its worth, as does support for a, b and g Wi-Fi. Download speeds were good (we tested on O2) and the device itself is quick and responsive, both within individual applications and changing between them. This is still an area of concern for the E71 and is becoming a problem on many iPhones as people load them up with third party software.

This web browser overhaul is clearly a work in progress, as our review model crashed frequently when using the browser, and exhibited some strange bugs, such as the screen going blank occasionally after loading a page if you moved the cursor during loading. We would hope this is rectified quickly via a software update.

Beyond the browser you get the usual bouquet of PDA applications such as an address book, To Do lists, note pad and calculator. There is also a Facebook client, Google Maps client and a few games. Third party applications for the BlackBerry are growing in number, but currently lag far behind both the Windows Mobile and iPhone platforms.

A three-horse raceThe enterprise smartphone market is bustling with options, but right now there are only three that stand out. The iPhone 3G, Nokia E71 and BlackBerry Bold have a lot in common. All weigh about the same (the Bold is 136g against 133g for the iPhone), all support 3G and HSDPA, all have passable cameras and all handle email extremely well.

It is on battery life where the three soon begin to separate. The iPhone 3G's battery life in moderate use is awful, lasting less than a day between charges. The Nokia is much better, offering just shy of three days between charges in similar use. The Bold on the other hand has maintained RIM's legendary record for battery life, despite the move to 3G. Battery tests are on-going at the time of writing, but in early moderate use tests, we managed four days from a full charge, with around 20 per cent still left in the tank before we plugged it back in to the mains.

For this reason alone, we see little reason not to choose a Bold as your business smartphone of choice. If you are looking at this as a consumer, you won't be disappointed either. GPS support is very good, and even coped well inside buildings. The BlackBerry Maps app is primitive but functional, while Google Maps will also make use of the built-in GPS chip.

The battery cover and microSD card slot will require some tender care in day-to-day use based on our experience and we would have liked a front-facing second camera for video calling, but otherwise, we think RIM is on to a winner at last. Not only do we give the Bold top marks on this occasion, but we are also giving it a well-deserved Editor's Choice award.

There are still some question marks over the buggy, but drastically improved web browser and a slight concern over the build quality of the battery cover, but otherwise RIM has delivered a long-overdue return to form with a device that will delight long-time CrackBerry addicts, will send Nokia and its E71 back to the drawing board and gives the iPhone credible competition in the enterprise marketplace.