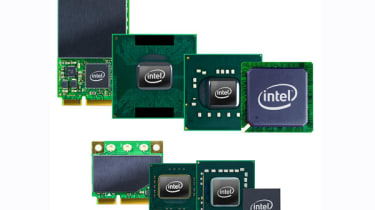 It's the architecture for Intel's next-generation family of processors, the successor to Intel's current Core 2 Duo chips.

Intel can mix and match components on the Nehalem CPU so that processors will have two, four, six or eight cores, running two threads per core, and connected to each other and to the memory and chipset by QuickPath.

QuickPath has three times the memory bandwidth of existing chips, allowing Intel to build the chipset and memory controller inside the CPU, along with a third cache.

But Nehalem promises more than just a performance boost: it is also more energy efficient than current designs. When the system switches off a processor core that is not being used to run an application, it can be turned off completely, without power "leaking" into it. This allows Nehalem to use full power for demanding applications, save power when for running simple apps or divert power to the cores that are running programs to make them run faster.

Applications have to request the extra power but the mechanism for that is already built into Windows, so it works with existing programs. Running memory at low power creates errors, so Intel has added built-in error correction.

When will the chips arrive?

The first Nehalem chips will be the four-core Core i7 for high-end desktops. These will arrive in machines in Q4 of this year, along with Nehalem-EP server processors that will support up to 288GB of memory. An eight-core server version and other desktop chips will follow in the second half of 2009, along with versions for notebook PCs.

Why should you care about Nehalem?

Nehalem is a new processor and is designed to work with new technology, from virtual IO to DDR 3 RAM. Processors are struggling to run any faster, battery technology is improving very slowly and heat and power bills are problems for servers. If Nehalem delivers the promise of a balance between energy efficiency and improved performance it will mean users will not have to choose between low power and high performance when they buy a server or notebook. The system will handle both, depending on what you ask it to run.

Rajesh Kumar, director of circuit and low power technologies at Intel, says: "High performance and energy efficiency are not necessary exclusive; if you innovate enough it's possible to get high efficiency and performance at the same time and you can really get big returns if you optimise the system around it.

"We have gone for energy efficient ideas that increase performance. Hyper threading in the cores gives you a big boost in multithreaded performance and power management is a breakthrough in Nehalem. Today we are into talking about mainstream processors but for the future you can think that if you can share power between cores, you can also share power between graphics and cores."

Nehalem is the dynamically scalable architecture for computing of tomorrow.

You don't get something for nothing, but Nehalem will let you choose between running more applications and having your battery last longer and when you only run a few apps you'll get better performance from them.