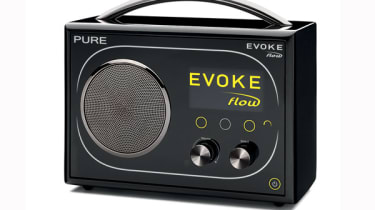 Pure, the British company best known for its DAB digital radios, has launched its first radio capable of receiving internet stations along with an iTunes-like web-based media portal it has dubbed the Pure Lounge'.

The Evoke Flow has integrated Wi-Fi to connect to the wealth of internet radio stations, as well as providing access to online services such as the BBC's Listen Again content and podcasts, and standard DAB and analogue FM broadcasts.

Colin Crawford, director of marketing for Pure, said internet radio had failed to take off so far as it lacked an 'iconic product such as the iPod". However, he said that Pure has delayed bringing an internet radio to market as it wanted its product to be a device that "acknowledged that the online source was two way."

Immediately from launch users will be able to sync favourite stations from the radio with the Lounge portal site, which will be hosted at www.thelounge.com.

Crawford also said that there would be additional services coming online by the end of the year such as the ability to purchase a track direct from the radio as it was being played, and tagging', whereby additional information about an artist or track could be pushed to the online portal.

"The radio is powered by our Meta CPU that is multithreaded, enabling it to split itself between running RISC and DSP functions, polling the button inputs and running the underlying Linux OS," he said.

He added that Pure had chosen Linux specifically because it wants to tap the potential of open source.

"We may later choose to expose the Linux platform fully, enabling others to add widgets and other extras. We didn't want to go with a closed, proprietary system."

The Evoke Flow will be available from September at an SRP of 150.