Can 3’s own-brand Skype smartphone cut it against better-known competition, and does it improve on last year’s original? 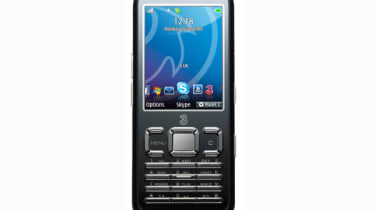 We've been big fans of 3's Skypephone since it first launched just before Christmas last year.

The original phone combined excellent voice call and SMS capabilities with support for Skype-to-Skype calling and messaging in a very neat and lightweight handset.

However, despite being well built and easy to use, it looked very basic and plasticy alongside handsets from the major brand names. It also lacked support for the emerging HSDPA high speed 3G data service 3 was rolling out at the same time.

Well, 3 has now addressed this and many other points with the release of the Skypephone S2, a new version of the phone, which not only looks more sophisticated and user-friendly, but also boasts a number of technology changes under the bonnet.

For a start the handset has been reconstructed, with a new keypad and casing. The original small buttons have been replaced with an array of thin raised bars, similar to a number of recent Sony Ericsson devices. However, on the S2 the buttons are wide and well spaced, providing a reassuring and comfortable clunk when you press them. Where it can get slightly confusing is around the answer and hang-up buttons, where each is actually part of a three-button cluster. It's not immediately obvious that each is actually a separate key, but once you get used to this all is well.

The back of the phone is now metal rather than plastic, which gives it a nice solid feel in the hand without making the unit too heavy at just 95g, while the camera has been upgraded from a 2-megapixel to a 3.2-megapixel unit. There's no flash, which is a disappointment, but it takes decent pictures, has a mirror for self-portraits and works well in low-light environments.

The display, while small at only 2.2in is very clear and very bright. The previous Skypephone's display was a bit primitive, and the on-screen display has been smartened up with new icons and a scrolling chooser' along the bottom of the display for quick-launching key applications like Skype and Windows Live Messenger. This replaces the dedicated Skype button found on the original phone.

The idea of a mobile phone operator actively encouraging free voice-over-IP (VoIP) calls instead of normal voice may seem counterproductive for the mobile network that is but for 3 it does make sense.

As a network it has the largest 3G spectrum, enabling it to handle high levels of data traffic. The company also saw the change in user habits, with text messaging, social networking and IM becoming more important to consumer users. The S2 makes use of 3's significant data capacity to offer VoIP calling as well as IM via both Skype and Windows Live Messenger, social networking through a dedicated Facebook application, RSS feed reading and mobile web browsing, while at the same time allowing conventional incoming and outgoing phone calls that do make the network money per minute.