Brother breaks the mould by releasing the world's first all-in-one A3 inkjet printer. Could this be the start of a trend? 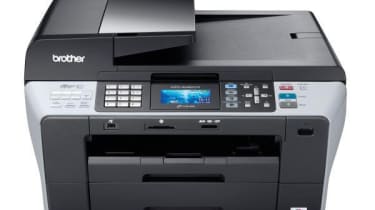 Ink-jet all-in-ones are rapidly making the transition from home-centred, consumer devices to business machines for SOHO and even SME use.

One of the moves which is easier, and a lot cheaper, for inkjets to make than lasers is to larger print sizes. Wider carriage and bigger paper trays are about all it takes to go from A4 to A3 print and Brother reckons there could be a market for an A3 all-in-one at a good price. This is the reasoning behind the MFC-6490CW.

By a good price, the company means just over 200 and by A3 it means twin A3 paper trays as well as an A3 Auto Document Feeder (ADF) for copying and faxing. Although the paper it's handling has twice the area of A4, the machine isn't twice as big as an A4 all-in-one, but the extra width is well used to provide more space in the control panel. Brother has taken the opportunity to include two paper trays, both of which can take A4 or A3 paper, but the top, 150-sheet multi-purpose tray can also take paper down to 15 x 10cm, making it suitable for standard photo prints, too.

What the trays can't do, though, is auto-detect the size of paper within them, which makes it awkward to send documents of either size, particularly over a network. To print correctly, you need to know which tray contains which size of paper, even though it may not be your job to set up and maintain the all-in-one. This wouldn't matter if each tray were dedicated to a particular paper size, but since both are flexible, it would be a big advantage to be able to print at least A4 and A3 documents and trust the printer to sort out which tray to feed from.

The control panel includes a double-width, four-colour LCD display, as on some of Brother's cheaper, A4 machines. This enables the printer to display, for example, a thumbnail photograph from a memory card with print or effects options next to it, rather than overlaying them on the image itself. The control panel has a fairly logical array of buttons, though some of the allocations are a little suspect and its operation may take a bit of learning.