Google Chrome has come out of nowhere with its own browser that's set the tech world alight with interest. We deliver our verdict. 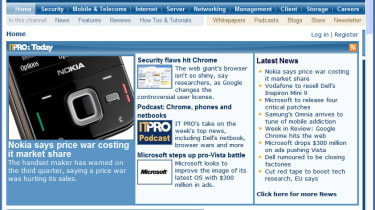 When Google launched its Chrome browser, we at IT PRO were as shocked as the next man. This is a potentially huge release, yet Google had kept it quiet during its whole two years of development.

And, despite the fact that this is Google's first "own-brand" browser, it can already be counted as one of the big boys. By borrowing heavily, on Google's own admission, from other open-source browser projects, such as Firefox and WebKit - and contributing some of its own, notably its JavaScript engine, dubbed V8 - Google has managed to produce a polished web browser first time out.

The first thing we noticed with Chrome was its speed. It launches like a greyhound out of a trap, with all types of pages loading in incredibly quick time. Side-by-side with Firefox 3 or the recent release of Internet Explorer 8 beta 2, it feels snappier, though timing the load times with a stopwatch revealed there's very little in it.

The IT PRO and BBC homepages loaded in roughly five seconds, while other, more complicated sites, such as Zoho Writer, took longer - 13 to 14 seconds to load on Firefox, Chrome and IE 8. But in a stress test Chrome edged ahead - we loaded 30 tabs on each browser, then visited the BBC iPlayer website and YouTube to see how smoothly video would play back. In all instances, Chrome managed the smoother result.

Stability is mighty impressive too. Google is making great play of the fact that it launches each and every tab in a different Windows process. The idea behind this is that it makes the browser more robust. With websites increasingly becoming more like applications than static pages, this is an important development. Fire up Windows' task manager and click on the Processes bar and you'll see what Google is talking about: for every tab you have open there's a separate Google Chrome entry in the list. And if a tab hangs, you can terminate it manually if you like - Chrome has its own, built-in Tab Manager, that enables you to do this.

The second thing you'll notice is that it's remarkably reliable for a first timer. Admittedly, at the time of writing we've only had the chance to work with Chrome for a few days, but so far we're impressed; 99 per cent of the time we had no problems. Hundreds of sites of every type we can think of: from video intensive Flash sites such as BBC iPlayer and YouTube to Ajax-heavy sites such as Zoho Writer and Sheet, and everything in between, including secure shopping sites, and sites with Java and ActiveX controls.

It's not perfect - for instance in Zoho Writer dialog boxes cause the page to blank out behind them momentarily, the Ctrl-S shortcut for save doesn't seem to have any effect and the site also caused a couple of tab crashes - but elsewhere it just seems to work, and for a browser that's still in its infancy that's an astonishing achievement.