The virtualisation firm has upgraded its Fusion software, but competitor Parallels isn’t impressed. 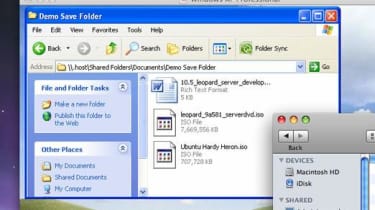 VMware has released an upgrade to Fusion, its desktop virtualisation software for Mac OS, which it argues is ideal for business users who wish to use their own computers or migrate from Windows or other operating systems.

The application allows business users to choose a computer regardless of the OS their IT department prefers, said Pat Lee, VMware's group manager for consumer products. "You don't have to choose, you can use best of breed," he said at the virtualisation firm's annual conference VMworld in Las Vegas this week, where Fusion 2 was announced.

"A lot of people bring their own machines to work," Lee added. "Fusion lets people run business applications while using computers they care about."

IDC researcher Michael Rose agreed. "With technologies available today, like VMware Fusion, switching' to a Mac by individuals within organisations, whole departments or even across the entire company, is more conceivable because it allows users to adopt Apple hardware and software, while enabling the continued use of Windows applications and their associated management infrastructure," he said in a statement.

VMware's Lee suggested the release of Windows Vista has spurred some individuals and companies to look for other systems and to use Fusion to help them keep their Microsoft applications running. "A lot of people are looking at alternatives because of that [Vista]," he said. "People are looking at other platforms."

Some of the new features include the ability to save files direct to the Mac, even when in a Microsoft-based virtual instance, and automatic virtual machine (VM) snapshots. It also now supports running Mac OS X Leopard Server as a VM.

However, the features list for Fusion 2 failed to impress competing virtualisation firm Parallels. "It's an interesting product, but there are no major improvements from the last version," chief executive Serguei Beloussov told IT PRO on the sidelines of the conference.

"It surprised me there are so little changes," he said, suggesting the product was rushed to release but developers were unable to include more features because of VMware's strict quality control measures.

Beloussov added the next version of his firm's own Mac virtualisation product, Parallels Desktop for Mac, was due for release "in the not too distant future."