LHC shuts down after helium leak

CERN scientists say it will be two months before world’s largest machine starts up again. 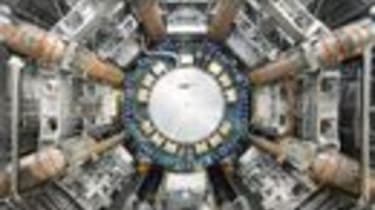 A helium leak inside the 17 mile long Large Hadron Collider (LHC) has caused the machine to be shut down.

A faulty electrical connection between two of the machine's 30-ton super-conducting magnets was the cause of the problem, according to CERN. The two magnets are believed to have melted, which led to the mechanical failure.

"Because the LHC is a superconducting machine that works at very low temperatures, in order to get in and fix it we've got to warm it up, then we go and fix it, and then we cool it down again, and that's a process that's likely to take two months," CERN spokesman James Gillies said.

The machine operates at a temperature of minus 271.3 degrees Celsius (minus 456.3 degrees Fahrenheit).

If the problem is not fixed by the winter, there may not be any collision of particles until 2009 as the LHC facility shuts down during the winter to save on energy costs.

The LHC had a successful start earlier this month after almost two decades of construction under the French-Swiss border near Geneva, Switzerland. CERN officials said that minor glitches were to be expected in the start-up phase of the machine.

"It's a very complicated machine, we've always known that there's the possibility of this sort of incident in the start-up phase and if it happens, then it's a two-month off time," said Gillies.