Debut handset will be made by HTC and carried by T-Mobile in the US and UK. 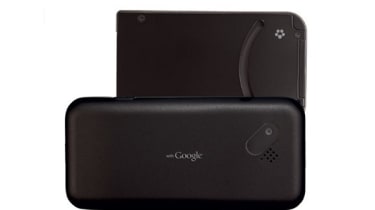 Google's long-awaited debut Android-based smartphone finally appeared today, as one of IT's worst-kept secrets was confirmed at a press conference in New York.

Called the G1, the smartphone is being manufactured by HTC, which is better known for producing a long line of handsets running Microsoft's Windows Mobile operating system. At an event last week in London, Google conceded that this early handset is not much different to HTC's equivalent Windows Mobile unit in terms of hardware.

Click here to see our gallery of images of the G1 smartphone.

Speaking at a joint launch event hosted by Google and T-Mobile in New York, Cole Brodman, chief technology officer at T-Mobile USA said: "There has been a lack of compelling reasons to use mobile internet services. We really haven't been able to rely on the integration of the mobile phone and the internet to actually serve us. We will change that with open systems and standards."

The device itself does indeed share many similarities with HTC's slide-out keyboard devices such as the TyTN II and S730.

It has a touch screen display, with the interface optimised for control with your fingers rather than a stylus, sparking immediate comparisons with Apple's iPhone. The screen slides to the side to reveal a flat QWERTY keypad; turning the device sideways will see the screen automatically rotate to match. The screen does not tilt up as it does with the TyTN II.

"HTC, Google and T-Mobile share a similar vision for making mobile internet access relevant, practical and fun. Today represents the culmination of this vision by offering a range of Google applications, services and content on a mobile device that people can really use and enjoy," said Peter Chou, chief executive of HTC.

"Android is nimble, accessible and powerful, and the G1 represents a fundamental shift in the way people consume internet access."