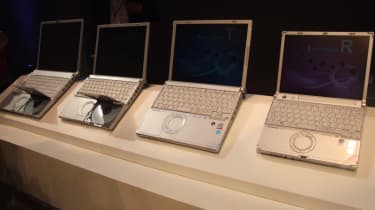 Panasonic has launched its new 8-series range with a trio of Toughbook Executive models in Toyko, Japan today, a month ahead of the European launch.

The company claimed that the flagship CF-F8 is the lightest notebook on the market to offer a large 14.1 display. It features a built-in optical drive and the ruggedised features for which the Japanese company is the market leader.

The CF-F8 is also the first widescreen display in the ToughBook Executive range, offering a resolution of 1,280 x 800.

Rance Poehler, president of computer solutions for Panasonic, said that the ToughBook range was known for its stringent testing procedures and claimed that ToughBook had a failure rate of only three per cent - compared to 24 per cent average for business notebooks.

"We hold ourselves to a higher standard, so we test our products how and where we need to. We are closely associated with ruggedness, and we have always innovated in business notebooks," he said.

Panasonic said it had gone into partnership with Qualcomm and is one of the first to integrate its mobile broadband Gobi chipset into a notebook, enabling worldwide compatibility.

"With integration of new Gobi mobile chipset, we will be able to enable global access for our customers," said Poehler.

"As well as for the enterprise, this will open up the chance for companies in small and medium sized businesses to experience reliable mobile computing," he added.

With the new range, Panasonic has moved to Intel's latest Centrino 2 'Montevino' platform, which brings with it the latest processors, chipset and draft-n wireless capabilities.

Intel's vPro technology is standard throughout the range, enabling centralised remote management capabilities in the enterprise.

"We listen to customers," said Hisashi Taniguchi, chief engineer of the hardware designing team. "And have been improving the display resolution, the battery and the CPU."

"By adding an integrated handle, we have made a high-performance, wide-display notebook with integrated mobile broadband to be carried simply and safely, stress free," he added.

Taniguchi said that Panasonic had been working closely with Intel to optimise power management and that the CF-F8 could deliver nine hours of battery life.

The notebooks are supplied with Windows Vista, though a Windows XP downgrade option is available.

Panasonic also announced the CF-W8 and CF-T8, both featuring a 12.1in display and a 1.2GHz Core 2 Duo, and offering six and seven-and-a-half hours of battery life, respectively. The CF-T8 has a touchscreen and is aimed at sales and service reps in the field.