At the global press launch in Japan, IT PRO got a chance to take a hands-on look at the CF-18. 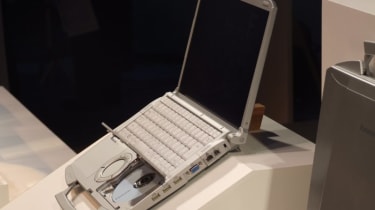 In Europe, while everyone think of the likes of Sony, Toshiba and Lenovo when it comes to laptops, Panasonic is a bit of dark horse.

This is for two reasons. First, it simply doesn't make them in the same of numbers as the other companies churn out there notebooks, and for that the fact that it prefers to sell direct to large companies so the chances are they if you don't have one, ToughBooks will not be on your radar.

This could be changing with the launch of the CF-18. As well as the normal routes to market, Panasonic will be making this available through the Dixons Group, so if you want to pick a single one up before making a decision on it for committing to larger purchases, it will be possible to do so.

Panasonic ToughBooks have always been designed with functionality rather than aesthetics in mind, and the new range is no different. But there's something rather cool about the new version with its black cover. The alternative is silver, and unfortunately we won't be getting the multiple colours available to the Japanese market, where it is sold as a 'Letsnote'.

The display is now widescreen, giving it an up-to-date feel. And, while its not LED backlit, it looks good. However, there was some debate as to the resolution it will be 1,440 x 900 in Japan, but it was unclear whether the European model would offer the same resolution or make do with 1,280 x 800.

The other major change is the integrated handle, which might sound silly but is very practical, and its done better than Apple did it about 10 years ago with its fruity-coloured iBooks. With the laptop weighing only 1.66Kg, it really is a pick up and go machine. We were told that the lid can handle up to 100Kg of pressure; it was designed with the famous commuter crush on the morning Tokyo trains in mind.

As it's a ToughBook, you don't have to worry about it getting roughed up a little. While the Executive range may not be deemed 'fully rugged', it can still handle a decent 76cm drop and every component is isolated and protected.

Spec wise, things have been updated to use Intel's Centrino 2 platform, which brings with it the latest speed bumps in terms of processors, graphics and wireless. Integrated Gobi wireless is an option so that you can get connected anywhere, from the US, to Europe and Asia. The crucial battery life is claimed to be around six hours.

There a decent range of connectivity on the outside too, with three USB ports, SD card slot and VGA, which is all fine no HDMI multimedia fripperies here.

On first glance the CF-18 looks like its achieved what Panasonic wants bringing ToughBook up-to-date, while keeping things lightweight and portable. We'll follow up with a full review as soon as we get a sample, in November.

Panasonic sets the benchmark when it comes to tough machines and there's no doubting that the CF-18 has what it takes to survive all but the most careless treatment. A large display, a decent processor and integrated broadband should make this a fine work tool to boot.

Are you hard enough? Panasonic brings its ToughBook line up to date with the Centrino 2 based CF-18.