T-Mobile is the first mobile player to bring Android to the masses, but will it be enough to tempt business users? 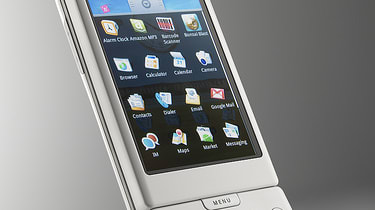 So that's the platform. What about the hardware? T-Mobile's G1 is an HTC handset that looks a little Sidekick-esque to us, which is no bad thing. The QWERTY keyboard is nicely spaced out and comes to life smoothly thanks to the way it's attached to body of the handset. It looks rugged without looking to chunky ensuring it's both practical and not too aesthetically challenged.

There's a choice or black or white casing and, while the phone isn't the most stunning handset we've ever seen, it's not too horrific on the eyes either, meaning there's potential for even the most style-conscious business or IT decision maker to feel comfortable being seen with it about their person.

The 3.2in 320x480 screen is generous but, alas, looks quite prone to greasy finger marks thanks to its incredibly responsive touch screen interface. We normally assume touch screens won't be responsive, but the G1's exceeded our expectations, which was a pleasant surprise.

Unlike the iPhone and other iPhone-esque touch screen smartphones out there, there isn't an opportunity to enter data using a virtual keyboard. Instead, you're forced to use the hard keyboard. Thankfully, that's no great hardship as the spacing considerations design-wise make doing so a nice user experience.

Keeping the keyboard company, but on the front of the device rather than hidden are five buttons and a small mouse/track wheel. This minimalist approach is becoming an increasingly common trend among phone manufacturers.

The G1 doesn't support video, which is a shame in our opinion, but the in-built music player is nice to look use, and sound quality from the integrated speakers was pretty good.

Unfortunately, our brief one-to-one with the device was over before we could put the G1's 3.2 megapixel camera through its paces so we're unable to comment on whether the snapper is any good.

What Google has achieved with Android is very innovative and offers a viable alternative to those not keen on the iPhone. That said, we doubt very much that business users will be rushing out to buy the G1 as their primary corporate tool once it launches over here in November.

Despite it being free on contracts over 40 a month, and T-Mobile recently having tweaked its fair usage policy to allow a soft' limit of 3GB of data a month rather than 1GB, there's just not enough meat on its bones - as it stands now - to get the corporate crowd salivating.

The hardware itself is not revolutionary but add the handset and Google's Android together and you have a powerful combination. While we rate Android highly, we're unconvinced that it will make much of a dent in the business space until it evolves slightly and other handset makers (such as LG and Samsung) join the party.