The email-via-phone pioneer hopes its first touch screen device will go down a storm when it comes to market later this year. 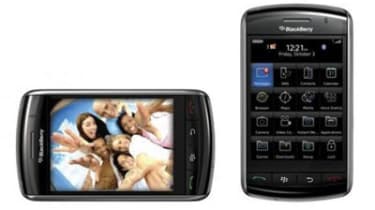 RIM and Apple will finally face-off this autumn with confirmation that the BlackBerry Storm will be released later this year.

Vodafone has an exclusive deal for the Storm in Europe, as well as India, Australia and New Zealand, while in the US it will be available only on Verizon Wireless.

Technology bloggers and analysts have speculated since early this year that the Waterloo, Ontario-based company was working on such a device. And late last month, Verizon Wireless sent out a promotional email that heralded its arrival.

The Storm, the latest BlackBerry aimed at the broad retail market comes with a touch screen that depresses slightly when it is pressed, RIM said, adding users will feel a soft click as the screen is released.

"This clickable interface is like an engineering marvel," RIM co-CEO Jim Balsillie said in an interview. "It is revolutionary."

Analysts have said that as RIM continues to push into the broader consumer market, beyond the executives and other professionals that have been its mainstay, it will see increased competition from other handset makers. RIM has consistently brushed off such concerns and its subscriber growth has backed up its confidence.

The Storm also comes preloaded with software for email and managing documents, as well as a media player for music, movies and photos. It's also equipped with a 3.2 megapixel camera.

RIM did not announce a specific release date for the Storm, nor did it offer details on pricing.

The Storm's planned launch comes shortly after RIM said it will roll out a flip-phone version of the BlackBerry to capture more of the retail market. It has also has great success with its keyboard equipped Blackberry Bold.

Launching new, next-generation devices is squeezing RIM's gross margins because of higher costs. And in order to keep luring new subscribers, the company has to make sure its devices are priced attractively. That has limited the company's ability to pass along the higher costs of making new devices to its customers.