Samsung attempts to please both business users and consumers with the Windows Mobile powered Omnia. Has it succeeded? We find out. 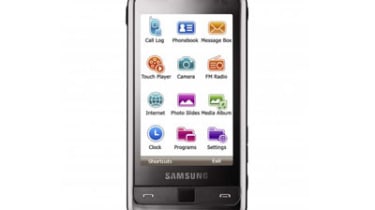 One of the biggest bugbears of the original iPhone for corporate users was its lack of business-friendly features such as Exchange support. A lot of water has passed under the bridge since then and, while Apple has evolved its product, other mobile manufacturers have been eager to learn from its mistakes.

Many are keen to steal Apple's touchscreen crown and cement a firm place in the hearts of businesses and consumers alike but few are failing to really offer people a device they can use both inside and outside the office without compromise. Until now, perhaps?

One such contender for the throne is Samsung with its i900 handset. The Omnia, as it is more commonly known, whose moniker translates as everything' in Latin and wish' in Arabic, claims to offer users everything they could want in a mobile device in one touch'. But does it really live up to the hype?

Dubbed an all-in-one maxi-phone fully loaded with top-of-the-line multimedia enhanced smartphone features' and backed by a 5.8 million (4.7 million) campaign in the UK alone, with ads seemingly everywhere from the tube to newspapers (we haven't seen any in the toiletsyet), the marketing bumf is enough to give you indigestion.

But, taking a step back from what the marketeers would have you believe you will actually find something of a business gem.

The exterior of the device initially looks pretty classy, but closer inspection reveals it as having a plastic rather than metal finish, which is a little disappointing. However, it doesn't look cheap, which is an important characteristic for anyone in a business environment, particularly so for those that attend frequent decision-making meetings.

The 3.2 inch WQVGA LCD touch screen with its 240 x 400 pixels is ample enough for most business users' needs. It's based on Windows Mobile 6.1 Professional, which may be enough to send some business users scurrying away. Samsung thankfully has given it a bit of a makeover, making it more pleasant to look at, though in use it's still not completely problem free.

Business users will appreciate that the inclusion of Pocket Office. On-screen icons are well thought through design-wise and there's can you drag your frequently icons onto the desktop', much like Apple's OSX widgets enabling a pleasing degree of customisation. However, things can get crowded rather quickly.

The user interface was generally responsive although applications didn't load as speedily as we'd have liked. It provides impressive haptic feedback, so you know your request has been received.

There's a range of input methods including keypads and handwriting recognition and a hard mouse' key at the bottom of the screen. Sadly, there's no room at the inn for the stylus, which is forced to live forevermore outside of the handset's casing on an entirely separate stick, so its eventual loss is near inevitable. However while you still have it in your possession you can admire its solid housing inside a retracting case.

An accelerometer cleverly flips what's on the screen from portrait to landscape (or vice versa). Unlike with the iPhone or most Windows Mobile devices it does this with the entire OS, which is useful, doing so with a slick resizing effect. There's a slight delay while the GUI re-adjusts but it's not too terrible. It certainly makes for easier viewing for Word docs and emails.

Those keen to while away hours spent travelling (but not driving) by watching videos will be pleased by the support for DivX and XviD. Users needing access to the web at the touch of a finger will welcome HSDPA connectivity up to 7.2Mbps and Wi-Fi, while workaholics will smile at the support for push email.

There's 8GB of internal ROM storage memory but a 16GB version is also available. This is boostable to a whopping 32GB with the addition of a 16GB microSD card, but you'll need to remove the battery to slide it in.