The ShareSpace is WD's first true NAS appliance, aimed at small offices and prosumers. We put it through its paces. 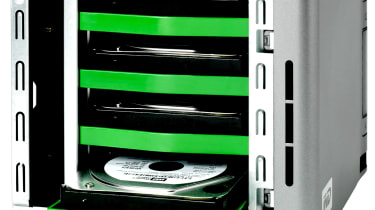 Western Digital is, of course, well known for its range of internal and external hard disks, but it is branching out into the SME NAS space with the ShareSpace.

We took a look at the 4TB ShareSpace which comes fitted with four 1TB SATA hard disks. However, a cheaper 2TB version is also available for 245 excluding VAT.

The ShareSpace has four SATA drive bays and supports RAID 0, 1 and 5 as well as JBOD. Unlike some NAS appliances which have front mounted drive bays, the ShareSpace's case has to be opened before the drive bays can be accessed. This isn't difficult though thanks to a pair of easily unfurled captive thumbscrews. The four hard disks are mounted in screwless trays, although some force is needed to remove and reinsert disks. The ShareSpace looks classy and makes little noise during use.

Configuring the ShareSpace is straightforward. A Flash-based discovery utility runs from the included CD and gives easy access to the web configuration interface. The interface is divided into Basic and Advanced sections. The Basic section allows password-protected user accounts and shared folders to be quickly set up.

More detailed controls are accessible only from the Advanced section. Users can be assigned to groups and assigned storage quotas to prevent anyone from hogging all the storage space. The users, groups and quotas preferences aren't grouped together as one would expect, but are located in three separate tabs within the Advanced interface which can make user administration more time consuming than it should be. There's also Active Directory support.

The ShareSpace can also be configured to email status notifications, although there aren't any granular settings allowing you to determine which status messages one would like to receive.

Music lovers will be pleased to discover that the ShareSpace can be used as an iTunes server, but this feature is completely out of place on this business-oriented NAS. It can't share a USB printer across one's network, which is an odd omission in light of its three USB ports and the fact that printer sharing is a common feature on competing products.

The interface isn't as slick or as responsive as the AJAX-based configuration interface used in Synology's NAS products, but it gets the job done.